After a very big, very busy day at Afton Station, to come home to the news that both Farrah Fawcett and Michael Jackson have passed away and the TV news is, naturally, full of both, I think I'm on information overload. I'll begin at the beginning...
Ron M. came to Afton with me today, thank goodness, because I don't think I could have handled the crowds myself. The day started with two very lovely people, brother and sister, in our driveway with the hood of their camper truck up. The brother and sister, from Santa Monica CA and Temecula CA, respectively, were having a problem with the belt that ran the air conditioner, and believe me, this was NOT the day to be without air conditioning! He borrowed some tools from David's stash and got the problem fixed well enough to make it to Miami, where they would have several repairs made. I trust they were on their way east by mid-morning.
From then on, it was a steady parade of travelers. There's a big Ford/Mustang/Shelby gathering in Tulsa starting today (and I mean BIG!), and an equally big Harley-Davidson rally in Oklahoma City starting today as well, so we hosted several pilgrims making their way to those particular spots. An 11-person Harley group from Kalamazoo, MI sought shelter from the heat for a while enroute. 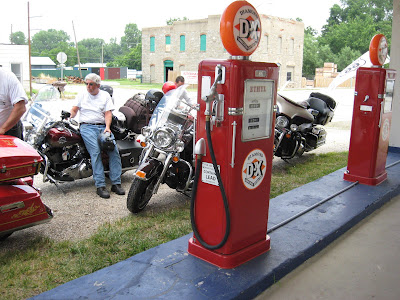 Four folks from the of North Texas Mustang Club stopped by in their very nicely restored vintage Mustangs. In front of the Station, at one point, we had three big semis (amazing that three truckers visited at once... all heading in different directions), a passel of Harleys, a couple of Mustangs, and a trailer hauling a Shelby Cobra. It got so busy that I'm ashamed to say that I allowed a wonderful couple from Switzerland slip in and out without really giving them a proper welcome. 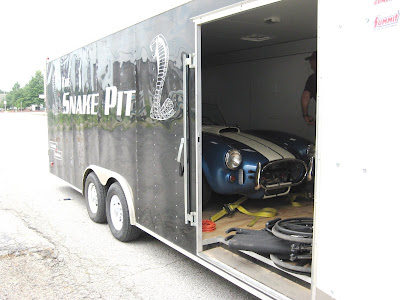 A Shelby Cobra peeks out from a trailer which the owner cleverly calls The Snake Pit.

So here's today's countdown: 36 visitors from Santa Monica and Temecula CA, Kalamazoo MI, Aurora IL, Kansas City and St. Louis MO, Dallas TX, Somerset KY, somewhere in IA (missed the city), Shawnee KS, Fairland, Vinita, and McAlester OK, and Switzerland.
Tonight, the hundreds and hundreds of Mustangs, Cobras, etc. are meeting here in Tulsa, actually about 1 1/2 miles from my house. I had thought of going to see the parade, but I think I'm just too tired. I'll stay home and watch what I'm sure will be endless TV coverage of the passing of two cultural icons on the same day. 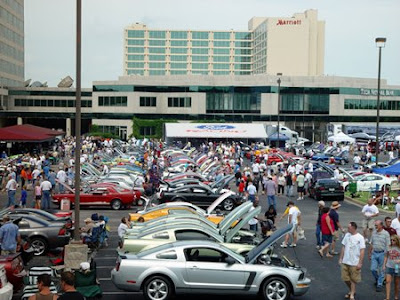 This is a fraction of the cars at last year's Ford gathering. This is the 35th consecutive year that it has been held in Tulsa. http://www.midamericafordmeet.com/index.htm
Posted by Laurel at 5:56 PM

Man, those are some sweeeeeet Mustangs! Slick and Blacky are crying out in the garage, wishing they could be there! LOL

awesome
we met up with the OK mustang club when we were there last - we are 'lifetime members' of the club - Daz went and spoke at their meeting :-)