"There's nothing to do in this town.."

Down at the corner of 1st and Main in Afton, the old bank building has been turned into a couple of apartments which I believe are government subsidized housing. Two of the people who live there are a deaf man and his wife, who has a number of health issues. They don't have any transportation, so they are pretty much stuck in Afton 24/7. Today, they walked down to visit us at Afton Station, and she nearly brought me to tears when she simply stated, "There's nothing to do in this town". She is so right. After they left, Ron M. and I got to talking about what it must be like to be lonely residents of a virtual ghost town, with no way to get out and DO anything. Very sad. We talked about how observing the lives of others less fortunate is the best way in the world to remind one of the good fortune of one's own life. Those are just a few quick words on a very important subject, and one we should all take time to ponder on occasion. (It might be noted that later on, three little Afton grade school kids wandered it, and said precisely the same thing that the earlier couple said. "There's nothing to do in this town." Although I realize that kids are prone to whining about that during long, hot summers, in this case they're right.)
________________________

Before driving to Afton on this beautiful morning, I drove down to the Cyrus Avery Route 66 Plaza to take some photos just after the sun rose. These are taken from the flat place on the top of the hill overlooking the Plaza and the old Route 66 Bridge, the early way to get across the Arkansas River. 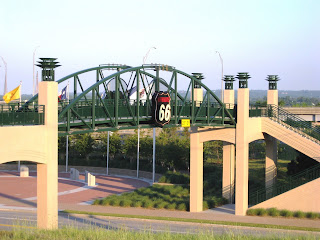 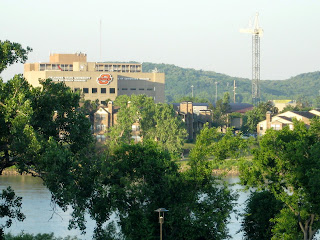 Across the river toward the OSU Medical Center 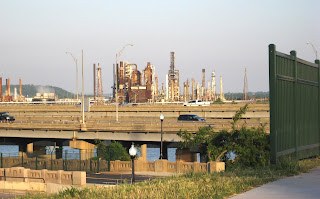 Afton Station was busy, busy, busy today, with no free moments at all. We had 24 visitors, not including three little grade school kids from town and the above-mentioned couple who have visited several times before. Our visitors came from St. Louis MO, Hanover Germany, Ames IA, Phoenix AZ, Waco TX, Tiffin OH, Bakersfield CA, and Miami and Adair OK.
We had two three-generation families visit. One of those families consisted of two travel trailers in tandem filled with grandparents, their adult children, and the grandkids. One of the little girls, we were told, is an avid Route 66 fan and so, since we love to encourage kids to love Route 66, we gave her a pin for her hat and an Afton Station postcard. She was quite thrilled.
The other tri-generational group was a father, son, and grandson who arrived in a police car! Closer inspection of the vehicle revealed that it's logo said "City of Gotham Police Department Power Tour". It turns out that the threesome from Phoenix, AZ was on it's way in their restored police car (obtained and restored by the son, who is a Phoenix police officer) to the Hot Rod Power Tour which begins in Madison WI next week. It's a mobile rally of rod and custom cars that wends its way across the U.S. going in a different direction each year. This year they're going from Madison, WI to Bristol, TN. http://krang.hotrod.com/powertour/hrpt_2009_power_tour_driving_directions_route_v5.pdf
They were delightful gentlemen who are hoping that next year's Power Tour will pass through Afton, although it might be a bit difficult to accomodate over 1000 cars on our street! :-) 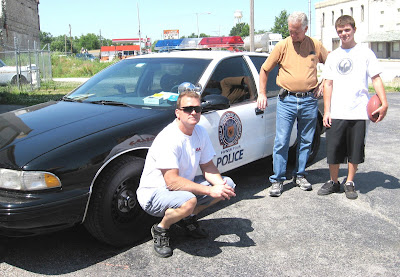 Our German visitor arrived on a motorcycle, and is not only doing the whole Route by himself, but also is spending several extra weeks touring National Parks out west. We know he'll love his first trip to the U.S. 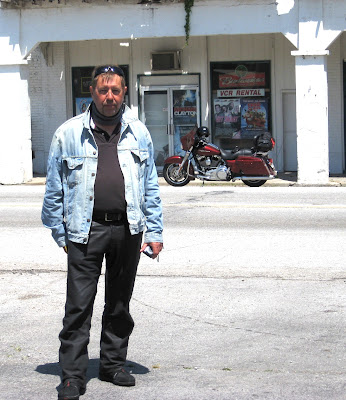 Glad you are there to provide something to do :o)

I love the City of Gotham police cruiser!

My son is autistic. We're spending a lot of money on his therapy. My wife is going crazy fighting the school and researching other therapies.

But, one thing I've learned is, when you think your life is bad, just look around and you'll see many people who'll gladly trade places with you.

I'll say a prayer for that couple.

Power Tour is a blast! My Dad and I have been on several. Skipping this year though.