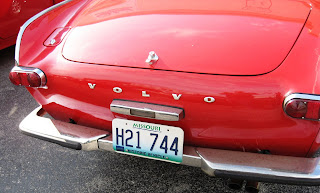 There are times when I sure wish I could sleep during the day! If I knew how to make myself nap, this would be the day. I finished my presentation at the Volvo thing a bit early and actually had most of the afternoon free at home. Working at Afton Station on Saturdays and Sundays curtails my "free time" on weekends, so this has been a treat. I'm pretty tired, but not tired enough to nap I'm afraid. Instead, I've been working on some buttons I'm making to sell at the Station, and catching up on email and snail mail (with the U.S. Open playing in the background).

I picked up Ron M. at 6 a.m. and we went off to Afton. We arrived at 8, got things opened up, and then Ron "Tattoo Man" Jones arrived. The Volvo folks came at about 8:30, five guys in vintage Volvos and another gentleman from Wisconsin pulling a cute little '70s-era trailer behind his later model Volvo. They didn't stay long, but I'll be seeing them later today in Tulsa. 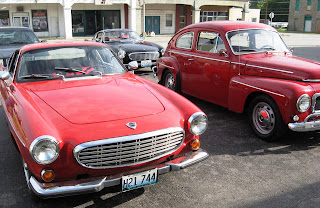 The vintage Volvo lineup
Marly came just in time for the first wave of visitors from the Oklahoma Route 66 Cruise and Poker Run. We developed a "production line", with Ron M. counting noses and taking photos, Ron J. handing out the cards for the poker hands, Marly stamping and initialing the passports, and me making sure everyone signed the guest book and taking money for purchases. 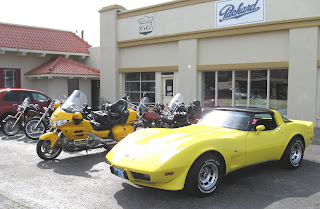 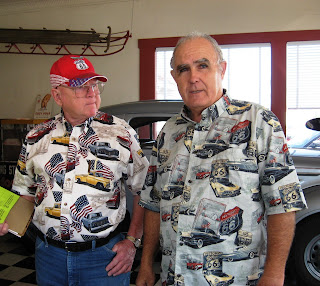 My friends Blaine Davis (l), owner of the iconic Blue Whale, and Mike Pendleton (r), my frequent visitor, officer of the Route 66 Assoc. of Kansas. "Car shirts" were the order of the day.

At 11 a.m., Ron M. and I had to leave to head back to Tulsa for the aforementioned Volvo presentation. When we left, there had already been over 60 visitors recorded in the book and it wasn't even noon! Betty had arrived shortly before we had to go, so I left Afton Station in the capable hands of Betty, Marly, and Ron J. I'm sure they had potentially the busiest day in the history of the Station, but I haven't heard from any of them yet. 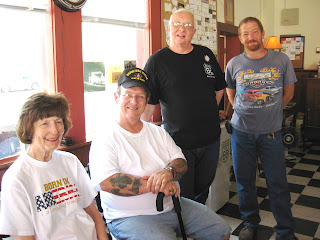 My dearly beloved, massively appreciated, and woefully underpaid (i.e. volunteer) crew. They were all there today!
It seemed surreal to be driving west on Route 66 before noon, because the sun was behind us rather than in front of us. I know it sounds odd, but since I drive east in the morning and west in the evening, the sun is always ahead of me. Thus, this small change lent an interesting quality of light to everything. By the way, it's hot, hot, HOT today -- in the mid-90s.
When we got back Tulsa and made our way to Jackie Cooper Volvo, the dealership where the festivities were taking place, we were about a half hour early so we were invited to partake of the buffet that had been set out for the attendees -- some fine barbecue, potato salad, and carrot cake.
My presentation went pretty well, although I heard my voice quivering a few times. I'm not really used to speaking into a microphone. They say that the sign of a good speech is when the Q and A period is long, but in this case I only took 5 questions, so maybe the talk didn't generate the enthusiasm I was hoping for. I gave a short history of Route 66, but since I'm not much into boring facts and dates, I tried to emphasize all the fun times one can have on the Mother Road, and all the great things a Route 66 traveler will see and experience. I'll know if it was a success if I find vintage Volvos lined up at the door tomorrow when I get to Afton. Hmm....

Lunch with the Volvo people 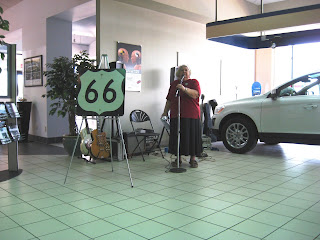 Me, attempting to appear knowledgable.
And that, thus far, is my day. Back to Afton again tomorrow for what I hope will be another crazy-busy day.
Posted by Laurel at 4:30 PM

I wish I could have heard you speak. I know I would have enjoyed it!

I was one of the fortunate Volvo folks who had the priveledge of visting the Afton station as well as hear Laurel's presentation in Tulsa.
What an incredible place! Laurel - I really appreciated your knowledge and passion for the old route.
Thanks
Glen
69 Volvo 1800SA

Thanks, Glen! It was fun to meet all of you! I hope the whole weekend was a good one for your group.