The corn is as high as an elephant's eye...

Well, almost. But don't you think it's at its most beautiful now, when the leaves are at the peak of their shine as they gently bend with the wind, and it is just beginning to tassel and set ears? This is when I start tasting it with my mind -- no butter or salt, please -- just barely steamed. This is when I start wishing I had a large enough property to grow my own, remembering the old days when we'd pick it young and toss it directly into a pot boiling on a Coleman stove set right next to the corn field. Kernels of Heaven! 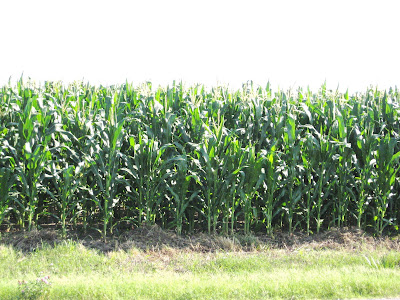 With temperatures expected to soar above the 100-mark today, I arrived at Afton Station early in order to turn on the A/C and get things done that required physical labor before the heat descended. I wasn't expecting the four big, heavy items I found on my doorstep. I was able to wrangle bundles of the OK Route 66 Trip Guide into the Station because they're held together with bands I could use as handles, but the two extremely heavy boxes of unsolicited advertising materials will have to stay outside until I find someone to heft them for me, since I'm not supposed to lift heavy things with my right arm. (Note: Later, Betty brought them in for me. Thanks, Betty!)
__________________

I've done all my chores, and now I'm waiting for the room to cool off and guests to start arriving. In reading the mail, I have come across a note from an 85-year-old University of KY graduate who wrote to say she saw the article about Afton Station in the alumni magazine, and she sent me a program from the Auburn (IN) car auction with several beautiful Packards marked. How sweet of her!
__________________

My first visitors today were the kids from "Links", the little local monthly magazine published by persons with disabilities. It's always fun to see them, and they put out a darn fine magazine. Subsequently, there were visitors from a parade of states, including Paris TX, Maumee OH, Sarasota FL, Jasper IN, Loogootee IN, Orange Co. CA, Milwaukee WI, and Empire AL. Betty came and co-hosted with me for most of the day. I've noticed considerably fewer foreign visitors so far this year, although I do realize that their usual traveling times are July and August, so maybe I'm just being impatient.

I had my second complainer of the season today, and that's not so bad since I've had over a thousand happy visitors thus far. This woman (whose home state will remain anonymous) started complaining before she got the door open. "We got lost." "The signage is terrible". "We're getting off this road and getting back on the interstate". "There's nothing to see in these little towns." Fortunately, another couple was there at the same time, and they were first to remind the lady (before I even had the chance) that every wrong turn simply allows you to see something you wouldn't have seen otherwise. It's all an adventure, after all! I added that it would be a good idea to procure a guide book instead of trying to "do" Route 66 blindly, but she refused to buy one or even take the free OK Trip Guide. Oh well!

When I got in the car to go home, the outside temperature was registering 103 on my car thermometer. It remained there all the way home. (No wonder those visitors earlier, in a 40s-era non-air conditioned Buick Roadmaster, looked so hot! But they weren't complaining!)
_________________

My pic-of-the-day is one I took this morning of the remains of old Route 66 tourist cabins on 11th St. east of Tulsa. This one makes me sad. The photo makes them look much more well-maintained than they really are. 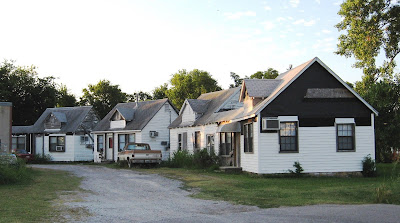 Sad when people to not have a sense of adventure :o(

West of El Reno Route 66 is poorly marked, too. But, that just means I have more of an adventure looking for it. Makes me feel more like Lewis and Clark.

Wonder what those people would have done in the 19th Century?

Oh well, let them go on their pre-packaged tours to Disney Land, et.al., where they don't find anything. Someone else finds it for them, then just shows it to them.

Do people live in the tourist cabins in the picture? I see a truck parked outside.

Hope your whiner didn't let the toll gate hit her in the butt on the way back onto the turnpike. If she thinks 66 is hard to follow, she ought to try the Lincoln Highway sometime.

Beth - Yes, those cabins are being lived in, at least some of them.

Emily - I resisted the temptation to hurl an EZ66 Guide at her head!