On Monday, I made a concerted effort to do all my chores that needed to be done this week, so that today after dialysis I could enjoy a whole afternoon to myself to do whatever I felt like doing. It's been many months since I've been able to do that, and I was feeling a deep need to see some new territory. No offense to Route 66, but as much as I love it, the scenery between Tulsa and Afton is starting to get a bit old!

So, off I went. When I left the hospital, I headed east with absolutely no plan in mind. As it turned out, I drove for about 10 miles before I realized I'd forgotten to go to the bank, which is directly across the street from dialysis. So, I ended up back where I started. After acquiring a little cash for the trip, I proceeded in a vaguely southeastern direction until I was out of the city of Tulsa. I was already thinking that I wasn't in the mood to go very far after all. It's so darn hot out there and the car A/C wasn't really keeping up with the oppressive humidity. But I plugged on, through the small towns of Coweta and Oneta. On the other side of Coweta, I realized that I was very near the tiny farm town of Porter. Porter is known in these parts for being the Peach Capital of Oklahoma. They hold a peach festival every year, and everyone looks forward to the annual crop. I had no idea if the peaches were ripe yet, but as long as I was that close, I decided to give it a try. The Livesay Orchard seems to be where everyone goes, so that was my destination. And I was rewarded when I saw piles of gorgeous peaches mounded in baskets everywhere. As it turns out, only their three earliest varieties had been picked, but I was given samples of each one, and they were awesome! So, I bought a half peck which is now sitting on my kitchen counter ready to be divided between a couple of friends and myself. There's nothing better than a fresh peach (unless it's a bowl of the incredible fresh peas I bought a couple of days ago at a farm store.) I love this season! 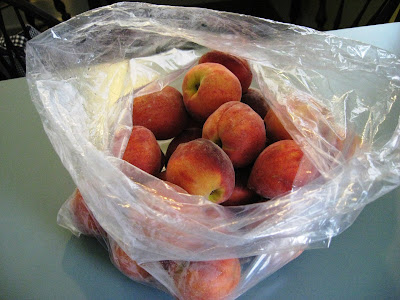 To get to the orchard, one must cross this creek. The name certainly discourages stopping for a long, cool drink! 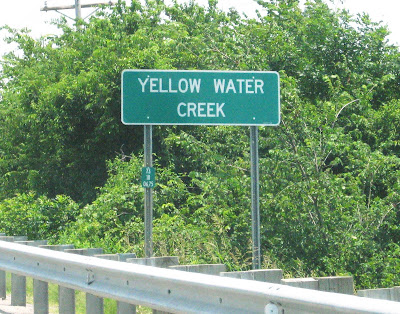 I found this sign in Coweta. The neon is all broken out, but it's a very cool sign and I hope somebody decides to restore it. 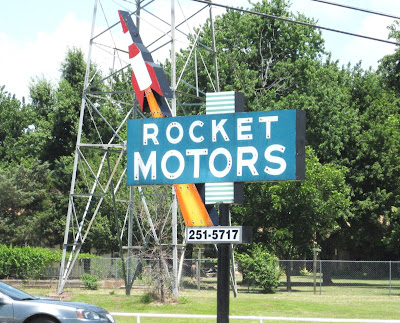 After buying the peaches, I drove home. So much for my long odyssey. My house is cool and dry, and I'm glad to be here. Back to Afton tomorrow.
Posted by Laurel at 3:59 PM

Mmm, our corn won't be on for a little bit yet, but we're getting close! As full as I still am after our cookout, you're making me hungry!

When I was still living with my parents we would go to Porter to pick our own. Then, when we got home Mom would bake a couple of fresh peach pies. They were Heavenly.

There were a few pick-your-own stawberry fields up around home, too. MMMMMMMM!