Planes, Trains, and Automobiles (and Fork Lifts, and...)

Well ok, no planes, except for those overhead. But today we had visits from a semi truck, several motorcycles, a couple of motor homes and of course lots of automobiles. All this as the trains kept whistling past. In addition to these, Afton has it's own in-town travelers. Ron M. and I call them Tractor Boy, Fork Lift Man, and Golf Cart Woman. Tractor Boy is a young kid, now on summer vacation, who spends most of his days driving up and down the road on his dad's John Deere. Fork Lift Man is a guy who spends tons of time moving things via fork lift from one storage place to another several blocks from the first. Golf Cart Woman is an elderly lady who drives somewhere (not sure where... perhaps the post office?) in her golf cart at least once a day. We're a virtual plethora of transportation media in beautiful downtown Afton! 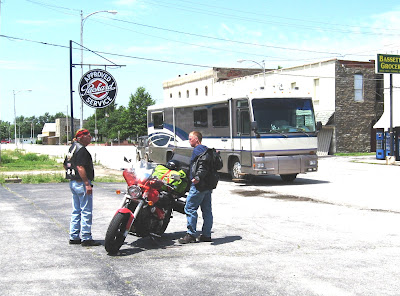 Here, for example are two bikers (one from Charleston, WV and one from Watonga, OK) discussing life on the Mother Road in front of a motorhome from Opelaka, AL. Another motor home, from Phenix City, AL also visited. The two are driving in tandem.

The trucker is from Warsaw, MO and has visited before. He spends a lot of time drooling over our '48 Packard Custom 8 Touring Sedan, because he had one just like it at one time. 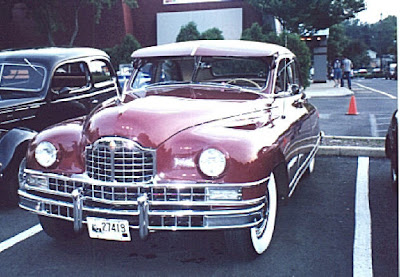 Those traveling by car were from Enterprise OR, Lewiston ID, Oklahoma City OK, and Plano, Sanger, and Abilene TX.

There was plenty of observation done today, since the weather made it possible to keep the A/C turned off and sit outside again. It was very nice until about 1 p.m. when it became rather beastly hot, but we stuck it out without the air conditioner, thus making me feel like a wet washrag by the time we left to drive home. Even so, sitting outside and observing is such a tempting thing to do in just about any weather. It's noisy, because semi trucks continue to roar past at a rate much above the speed limit. But the more we sit waiting for visitors and watching the passing parade, the more we learn about who's passing. For instance, pickup trucks are almost always local and rarely stop at Afton Station. Convertibles are a better bet than hardtops for stopping, and SUVs are the best bet of all. Motorcycles with packs are long distance travelers and often stop. Motorcycles without packs are locals out for a spin. Rental cars are far more likely to stop than family cars, and often carry foreign visitors. Motorhomes are somewhat of an enigma, since they're usually travelers and yet they rarely stop to visit us. I guess it must be because most of them are driving past to get to their destinations at the many campgrounds on the nearby lake. Big rig trucks stop quite a bit more often than one would expect. So, we're learning how to sit outside and predict, by the time they're a block away, who will stop and who won't. (NOTE: Our track record isn't that good!) But even on dull days, we try to make sure there's never a dull moment at Afton Station!
Posted by Laurel at 6:24 PM

I love your vehicle analysis! I can just imagine you sitting outside and taking note of all the vehicles that come through!