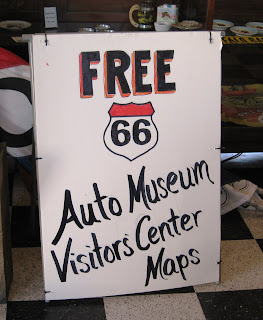 My daughter Sarah is here for a visit and I'm terribly short on blogging time, since obviously I want to spend as much time as possible with her. She's asleep now, however, so I've crept into my office to offer assurance that I'm still alive, and to give you the answering machine contest results.

The first three correct answers I received were from Emily Priddy, Lynn (Lulu) Bagdon, and Ron Warnick. I received another correct answer via a phone call from Mike Ward, so I'm giving him a prize too, since we were able to have a nice long chat which I enjoyed greatly. Oh, and Denny Gibson gets a prize as well, since he was also correct and I'm still laughing about his NPR comment. The person that Ron M. was able to mimic so accurately was that of Michael Walllis. I realize that the contest was a bit unfair, since some of you have never had the pleasure of hearing his very distinctive voice. Besides being the author of Route 66: The Mother Road (the volume which is responsible for starting the resurgence of popularity of Route 66), Michael is known for his deep booming voice which can be heard at lectures all over the country and as the voice of the Sheriff in the movie Cars. http://www.michaelwallis.com/. Anyhoooo.... the prizes, meager as they are, will be sent out to the above five folks, provided I can find five prizes. I think I have all of your addresses, but I'll let you know if I don't.
Trevor.... good guess, but it wasn't former President Nixon. That should be obvious, since the message contained no lies.
Ron W. ... Ron M. was terribly insulted by your laxative comment!
Emily ... quit ragging on my antique answering machine!
(I love you guys!)
When the daughter awakens, we're off on a little road trip which will include a short visit to Afton Station, so I can't think of a better way to spend the day which, by the way, also happens to be my birthday.
Posted by Laurel at 6:00 AM

You certainly are up early on your birthday. Hope it's a dandy.

Laurel, pretty good. Can't wait for your next contest!

Next time, he should mimic John Wayne, I'll get that one right off.

I guessed Richard Nixon, too! I'm glad I wasn't the only one!

I have not one, but two, copies of Mr. Wallis's book, but have never heard his voice!

Enjoy your visit with your daughter!

Did you not watch "Cars"? Mike Wallis voiced the Sherrif in that movie. He does have a deep, distinctive voice.

But I missed it, too.

And I don't yet have his book. I'd like to get both his Route 66 and his Lincoln Highway books.

Darn, I got here too late for the contest which I definitely would've enjoyed. Glad you're seeing daughter, make some memories.