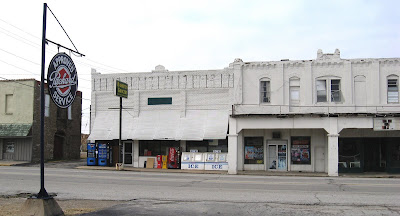 I'm so sad. I knew it was coming, but I didn't think it would happen this soon. Shortly after we arrived at Afton Station this morning, Tommy Bassett came over to announce that he's officially closing his little grocery store next week. His grandfather founded Bassett's Grocery in 1922 and his father ran it until Tommy took it over many years ago. Now, Tommy is getting older and ready to retire, and business has fallen off lately with big, relatively new WalMart Supercenters in the towns both east and west of Afton.

It's hard to describe how sad this makes me. I've even surprised myself by this reaction. I don't want to be the only business in town! I mourn for what was once a vital, thriving community and now is sinking into ghost town status. I mourn for the beautiful historic building that houses Bassett's (built in 1911 for the Pierce Harvey Buggy Co.). I fear it will fall into the "wrong" hands and be razed, the fate of so many other buildings in town. I mourn for the few folks who still live here who can't make the trip to a distant town to buy groceries. I mourn for Route 66 travelers who, a few years from now, will never know the quaint charms of a small town grocery.

Bassett's is up for sale or lease -- the whole building and contents of the grocery store. The rather large building includes space for two other storefronts and apartments above. Tommy also said he'd lease all the grocery equipment and fixtures to anyone who is interested in running it as a grocery store again. I'm hopeful, but not particularly optimistic, that some energetic preservation-minded person will take a chance on this piece of Route 66 history. I don't wanna be the only gal in town!!!

Despite all of this, it was an exceptionally good day at Afton Station. Ron M. was with me, and Betty stopped in for a while. We had 17 visitors, coming from Minnesota, Arkansas, and Missouri, and from Claremore, Stillwater, Tahlequah, and Vinita Oklahoma. As usual, they all had their stories to tell, but for once I'm not really in the mood to tell them.

To close on a more upbeat note...
I love flowers that bloom year round! Here are my pansies, planted last fall and looking even better than they did before winter came. Look closely and you can see that my daffodils are about to flower, too. Hurry up, Spring! 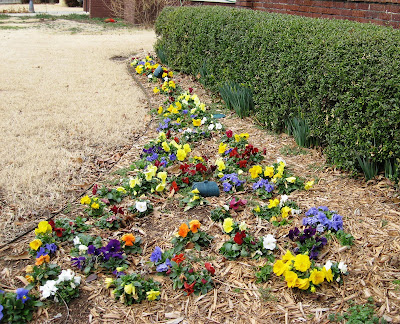 How sad. I hope a conservation minded person comes up and purchases the place :o)

I do believe that with some cosmetic fix-up and correct marketing to Route 66 traffic, this could be a viable business for someone!

Arrrggg! I stopped there once for road trip groceries, and was rewarded with the sight of old refrigerated food counters:

Older store fixtures with even a hint of style are a vanishing sight.