Jan and Vital / Henry and Joseph

I drove up to Afton this morning with the idea of spending about an hour finishing the reorganization job I started on Sunday. However, I hadn't been there for 10 minutes before a car pulled in and it was clear that I was about to have visitors. In walked Jan and Vital, two smiling guys from Belgium who are near the beginning of a two-week drive across Route 66. Frankly, I was astounded. European visitors in the winter! Unheard of! When I asked why they chose February for their adventure, they said it was because nobody else does it. Sounds reasonable to me. I did warn them that a number of places would be closed during this season, but they remained undaunted. A nicer and more upbeat pair of visitors would be hard to find. Both spoke excellent English and remarked that they were impressed by the courtesy and cautiousness of American drivers. They stayed for about an hour, bought quite a few books, pins, and key tags, then went on their way. I'm SO glad I was there to greet them! 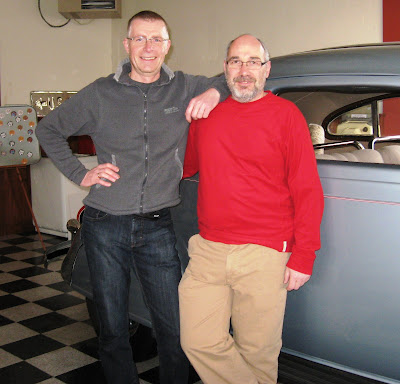 Speaking of guys on a mission..... On my way home I stopped in Chelsea to photograph this building. There's not much I like better than a ghost sign that advertises something that no longer exists. The Kaiser-Frazers that were apparently sold from this building were the brainchild of a pair of guys, Henry J. Kaiser and Joe Frazer way back in 1945 when they teamed up to produce an automobile that would be affordable for postwar America. The partnership lasted into the late '50s, after which there were many changes to the company and by the '60s Kaiser was basically producing only a line of Jeeps. Check it out at: http://www.spiritus-temporis.com/kaiser-frazier/. 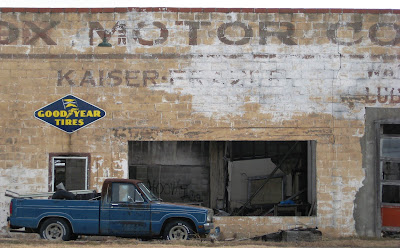 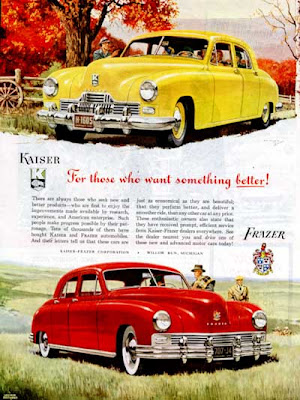 What a couple of great visitors! How cool that you were there to greet them--I'm sure you were part of making their trip a memorable one.

Those Kaisers are sharp.