A little more about Bassett's 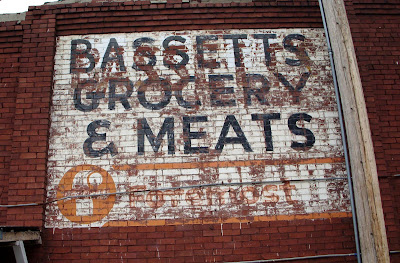 I'm a little bit obsessed about finding a way to keep Bassett's Grocery alive. I appreciate Ron Warnick featuring it on his blog today, http://rwarn17588.wordpress.com/, because he gets many times more hits than I get here.

It just seems that Bassett's could be a very viable business if a few things were to happen. For one, it would need to be advertised as a Route 66 attraction. It's one of the oldest -- if not THE oldest -- continuously operating groceries on all of Route 66. It's never really taken advantage of the tourist trade. There's never even been a Route 66 shield on the exterior, and those of us with business on the Route know that tourists, particularly foreign tourists, are very much attracted to that shield. Word of mouth and inclusion in Route 66 guidebooks would also help. Secondly, here are a couple of things I didn't mention in yesterday's post. The store comes with a viable and active video/DVD rental business. It also has a full butcher shop in the back. From listening to the wishes and wants of tourists who come to Afton Station, we know that one thing many of them are seeking is a place to sit down and have a sandwich, or even stand up and have one! Tommy never made sandwiches at Bassett's, although he did sell fresh sliced deli meat and bread. But I think a couple of tables and a small sandwich-making operation would be a big attraction. Look how well Wrink's Market (Lebanon, MO) and Eisler Bros. (Riverton, KS) do by just offering sandwiches.

Well, that's enough from me on this subject. I just really want to see something happen over there. The town of Afton needs it! 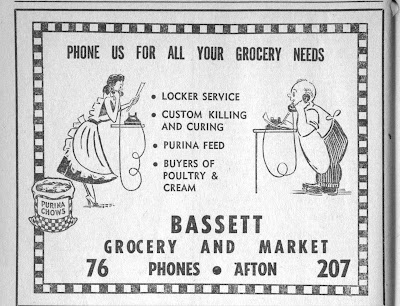 Ad from an early '50s newspaper

Just now getting caught up on blogs, and very disappointed to read of the closing. Let's hope that at the very least, they can keep the wrecking ball away from a historic building. :(