Thursday This and That

Disclaimer: Nothing here has anything to do with Afton Station, and only one thing has to do with Route 66. So, sign off now if you're a purist. :-)

This morning, I ran errands. I haven't been to a big chain store in years, but I decided Target was my best bet for replacing a broken blender. I really do try to support the "little guy" and local places, but for a small appliance, I really wanted a variety to choose from, and Target seemed like it would be the place for that. It was. I ended up with a new blender and also two pillows (on sale for $4 each) for the guest room bed. I didn't stay long, but I did poke around long enough to know that nearly everything I looked at was made somewhere other than the U.S. I knew that before I went in of course, but I just wanted to verify the fact. I do hope that our econony will eventually improve to the point where more folks will be able to afford American-made products, thus bringing a rise in employment for our citizens.
On the way home, I made a detour down to 6th St. in downtown Tulsa. Last night's news announced that the area on and around 6th St. (known as Tulsa's Pearl District) is up for a "major overhaul" and "upgrade". Now, the Pearl District is, admittedly, a run down former small manufacturing, small retail, and warehouse area which has absolutely fallen on hard times. But when I first moved to Tulsa a few years ago, I fell in love with 6th St. in a way that only a weird person who enjoys urban ruins could. I'm sure I'm one of the few people around town who occasionally drives down 6th St. just to soak in the ambience. I can't help it, but I'm a little sad about this proposed gentrification. I took a couple of (bad) pictures of 6th St. as it is now. Plans for the overhaul can be seen at: http://www.cityoftulsa.org/community/Revitalization/documents/6thStreetEntire.pdf 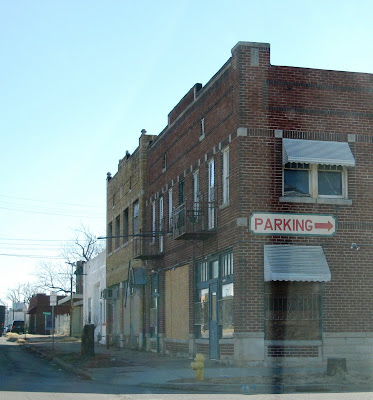 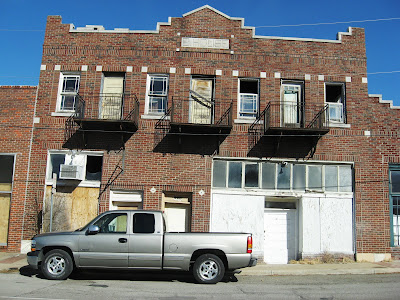 On the way home, I stopped at the site of the Meadow Gold sign reconstruction. (This is the part about Route 66.) The underpinnings are all in place, ready for the actual neon letters to go up. The base is finished and cleaned up. I understand it will be ready for a dedication ceremony in a matter of weeks. 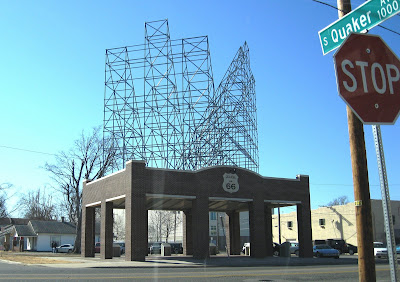 This afternoon Ron and I went to see the movie "Milk". Besides championing a cause of which I'm entirely and steadfastly supportive, the film itself was incredible. It made me an emotional wreck, a condition from which I'm just now recovering. Sean Penn, an actor I've frankly never paid much attention to in the past, delivered a portrayal which, as far as I'm concerned, damn well better get him an Oscar. I can't think of a thing wrong with his interpretation of the role of Harvey Milk. I remarked to Ron that when the fight for equal rights for gays was taking place in the larger cities in the U.S., I was almost completely insulated from it, living in a suburb and raising my small child. I'm sorry about that. I would have been out there on the front lines, I think. I highly recommend this movie to everyone, regardless of how you feel about the issue of gay rights. 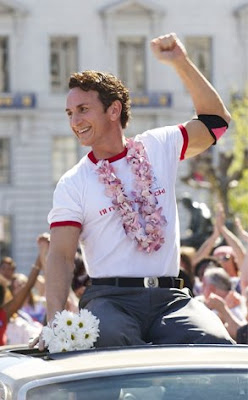 I would like to support smaller stores, too. But my wife judges a town by whether or not it has a Wal Mart.

As for "Milk", well, as a Christian I think homosexuality is an "Abomination". But, hey, we can agree to disagree.

I'm still praying for you to be healed of your kidney problem.

"I fell in love with 6th St. in a way that only a weird person who enjoys urban ruins could."

I've also heard wonderful things about "Milk." I remember when he was killed, but that was very early on in the days of gay rights. I still find it amazing that there are some that can't accept their fellow human beings for who and what they are, and for who they love.

If you liked Sean Penn in that movie, you might enjoy "I Am Sam." He is wonderful in that, and it is a really good one!

Another excellent commentary on gay rights is the recent movie shown on Lifetime -- "Prayers for Bobby". I urge you to see it. I believe you can get it on the Lifetime website now. Sigourney Weaver is considered to be an Emmy candidate for her performance.