I just knew that if I blogged long enough, eventually I'd end up with a "Miscellaneous" entry. Well, here it is! I've been really busy with my daughter Sarah, who is visiting from Chicago. Sarah has a new Nikon that she's been experimenting with, and here are a couple of the shots she took with an interesting new lens. This is my little bungalow, kind of weirdly distorted. I like it! (Note the brown lawn.... Bermuda grass.... ugh). 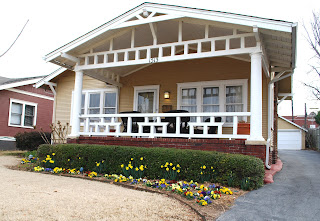 On Tuesday, we drove up to Afton Station, where Sarah took scads of pictures, mostly of the cars. Here's just one. 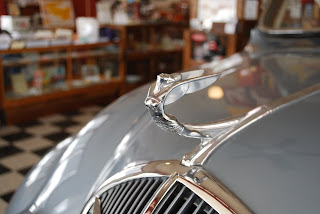 Meanwhile, I realized I never reported on activity at Afton Station last Sunday. I had my first five visitors within the first half hour after opening. They were from Pleasanton CA, Webb City MO, and Pryor OK. After that, there was a long dry spell until Betty came in and stayed with me for an hour or so. She brought me a wonderful birthday present -- a pound of Amish butter and a pound of fantastic locally-made sausage.

Later, I had a visit from a fellow from Grove who stops in often to chat. For the remainder of the day, I just watched the slow emptying of one of the storefronts of the building across the street, which had been rented out as a potential flea market that never materialized. It's hard to believe that so much... excuse me... junk could be stored in one little space. I also had a nice long phone conversation with my friend Mike from AZ, who was calling to offer an answer (which was correct) to my answering machine quiz.

Today, Sarah and I plan to take a ride up to Coffeyville, Kansas. Why? Because it's there! Looks like rain, though.

Coffeyville...isn't that where some famous shootout took place? Something to do with gunslingers....

Sounds like you're having a great time with Sarah, and I'm so glad you're enjoying your visit! Love the hood ornament pic.

As for the Miscellaneous title...I think I've used that one in the past. Just yesterday I used Hodgepodge, and there have also been Odds and Ends, and This, That, and T'other. Sometimes there's just no good title for an entry, so go with whatever works!

Beth, you're probably thinking of the raid when the Dalton Gang attempted to rob two Coffeyville banks at once in the late 1800's. Folks from the town rallied around, opened fire, and ended up killing the robbers. I think there is now a Dalton Museum there. Did you see it, Laurel?

Yes, but it was closed. I was there once before, though. I sent Beth the website for the Dalton Museum.

Glad you and Sarah are having such a great visit :o)

I was born in Coffeyville. It was October 5, 1892. The Gang was made up of Emmet Dalton, Bob Dalton, Grat Dalton, Dick Broadwell, and Bill Power. Outlaw Bill Doolin was also a member, but his horse broke a leg on the way to Coffeyville, and so he missed the shootout. Emmet and Bod went to rob the Condon National Bank, and the rest went to the First National Bank. In the First National, the bank manager said the vault had a time lock and wouldn't open for another 10 minutes or so. Grat decided to wait, and that was all the time necessary for the towns people to organize. They went to Isthams Hardware, which I believe is still there and in business, and armed themselves. What followed was one of the last big gunfights of the "wild west". Emmet was the only survivor of the gang, and he had 29 bullet wounds. Four townspeople died, too.
Emmet reformed and wrote a book called "When the Daltons Rode", which was later made into a movie. He visited Coffeyville only once after that, to see his brothers graves.
Ironically, the Daltons had once been federal marshals. A couple died in the line of duty.