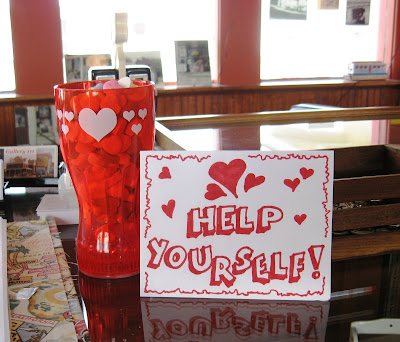 It's a cold and quiet day, so far, at Afton Station today. Although I arrived 45 minutes early, Ron "Tattoo Man" Jones was already here and had opened up the place. It was good to see him after his 5-week recuperation from surgery. He was sporting the tattoo he got yesterday -- his 75th Route 66 tattoo. This one is an image of "Rootie", the character that artist and author Jerry McClanahan uses with his signature. Jerry is the author of the definitive Route 66 guidebook. This one is on Tattoo Man's shoulder. 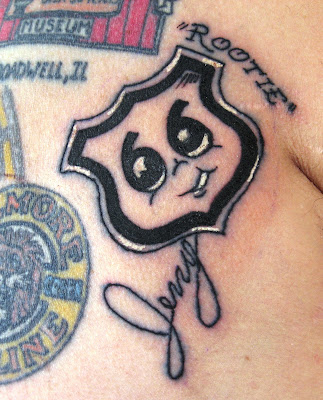 I'm writing this at noon. Ron Jones has just left, and there have only been two visitors so far, a very nice couple from Sioux City, IA who are traveling from Springfield, MO to as far as they can get on Route 66 in 10 days. I put out some candy in honor of Valentine's Day, but I suspect I'll be taking it home with me after the weekend if business doesn't pick up a bit.
Since it's bird-count weekend, I was going to try to photograph the little wrens that build nests IN the ceiling of our portico at Afton Station, but I guess they're too cold to come out today. I can't believe how they squeeze through the tiny crack where the molding joins the ceiling, carrying their nest-building materials with them. Here's a picture where you can see some straw and grass hanging out. Today, I can hear them chirping up there, but they're not coming out for photo ops. 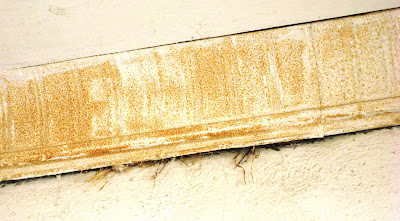 Two more guests have just come in, a couple working their way back to Kansas City from Tulsa. They said they've managed to get their 10-year-old granddaughter interested in taking a Route 66 trip with them. Always good to hear!
On my way here this morning I stopped to take a picture of an old, abandoned roadhouse in Chelsea called Cowboys. Although apparently it hasn't been closed long enough for their signs to be considered actual "ghost signs", I think they're candidates for that in the future. Every time I drive past Cowboys, I can imagine the crazy good times that were probably once had there. 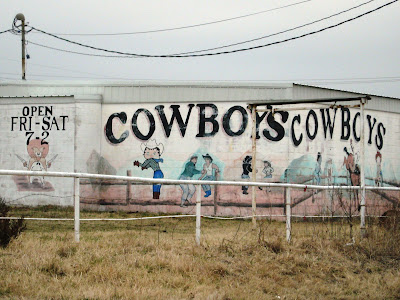 Just before closing, two guys from Tulsa came in with two small children. While the guys checked out the cars, the little ones were happy to hang with the toy gas pump we have there for kids, as well as the pressed penny machine. One of the guys, in his 20s I'd say, is a big Route 66 fan and knows a lot about every aspect of it. I get very excited when a younger person shows that kind of enthusiasm. Most of my guests are a bit on the old side, so it's great to know that there are a few of the younger generation ready to carry the Mother Road torch.
And finally, as I was turning off the "Open" signs, a car full of 4 family members rolled in --Mom, Dad, Grandma, Son. They were from Decatur, Illinois and had a few days to roam the area.
I'm home now.... a bit tired but quite pleased with another busy winter day.
Posted by Laurel at 5:51 PM