Well, it's not as corny as Kansas in August, but Sarah and I had a great little one-day road trip up to Kansas yesterday. We stopped for breakfast at Karen's Kountry Kitchen in Collinsville OK, and after enjoying a really great meal, we started thinking about the three "K"s in the name, and wondered if maybe we'd patronized a place that had connections to an organization of which we very strongly disapprove. Probably not. No white hoods there, just some perfectly nice personnel. We hoped they were simply being "cute" when naming the place.

From there, we continued further north and over the border into Kansas. The first town in Kansas, and our original destination, is Coffeyville. Coffeyville is a charming little town which has done a nice job of preserving many of their historic buildings. However, it seems that there are quite a few more empty storefronts than there were during my last visit about two years ago. I know that in July of 2007 Coffeyville had a major flood, but I don't know if that has anything to do with the empty stores, or even if the flood reached downtown. 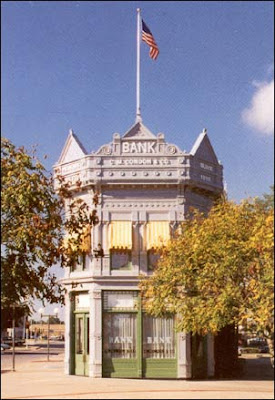 I wanted to show Sarah the Dalton Defenders Museum, a small museum devoted to telling the story of the notorious Dalton Gang of bank robbers. Read about it here. It's mighty interesting reading. Dalton Defenders Museum, Coffeyville, Kansas Unfortunately, the museum was closed, so after a look around town, we left Coffeyville and headed toward Independence. Here's the gang, having seen better days. :-) 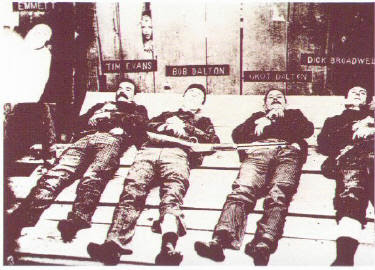 Independence, KS is one of my favorite small towns anywhere! At one time, I actually got real estate brochures and considered moving into one of the big Victorian homes there. The prices were right, but I'm glad I changed my mind, since I wouldn't have had a single friend in the town. When I visited before, Independence had a great little old-fashioned department store downtown that was still open for business, and that was one of the things that charmed me. Alas, on this visit we found the building unoccupied. Another WalMart-inspired casualty, no doubt. Independence still has a great city park and a neat little zoo.

Four or five miles outside of Independence one comes upon The Little House On The Prairie site. On the spot where the Ingalls family once lived -- and the site about which Laura Ingalls Wilder wrote -- a small outpost of buildings representing how the family lived has been built. Actually, the buildings (a post office, a school, and a log house like that of the Ingalls family) are actually buildings of the period that have been moved to the site, although none were originally there. Despite not caring much for "fake" antique villages, I love this place because 1) I've never been there when there has been another living human on the site and 2) the prairie land around the site is vast and flat and windy, just as I'm sure it was during the time people were first settling there. Once again, we were the only visitors to the site. I wanted to show it to Sarah and have her take some photos there. Between the two of us (me, a not-very-good photograper and her, learning to use a new camera) we managed to take a few decent shots. Having a rather foreboding sky helped. 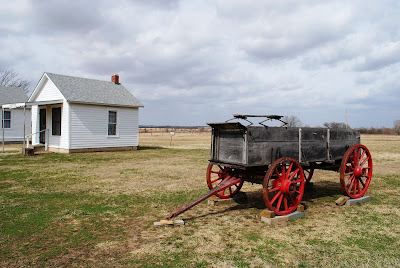 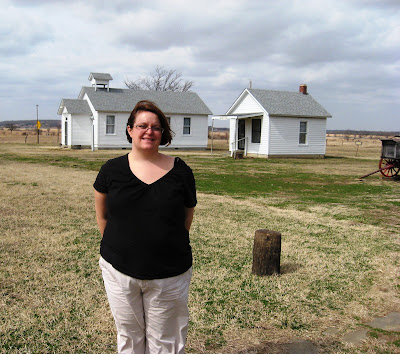 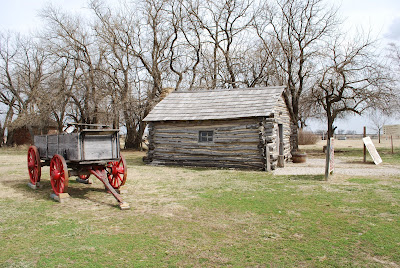 We also briefly visited the towns of Caney KS, Nowata OK, and made a fast pass through Bartlesville. We also drove through the tiny, tiny town of Liberty KS, a town that intrigues me so much that I once wrote a short story about it. We arrived home to find that Sarah's flight had been cancelled, so I got to enjoy my daughter's company for one more evening. I took her to the airport VERY early this morning.
Posted by Laurel at 11:57 AM

The playwright William Inge was born and raised in Independence. I think his boyhood home is still standing. He was buried in Mt. Hope Cemetery and his headstone reads simply, "Playwright." I'm pretty sure that much of the film "Picnic" (based on his play) was done on location in and around Independence in the 1950's. There were some pretty major stars of the time in the cast of the film.

Sounds like you had a great visit with Sarah, and managed to cram a whole lot of fun into a short visit!

You passed near where I was raised. I was born in Coffeyville, KS. Raised near Wann, OK. I went to Wann school K-3. Went 4-9 in South Coffeyville, OK. Then 10-12 in Lenapah, OK.

Maybe you could go visit Cherryvale, KS. Home of Vivian Vance, who was on I Love Lucy. And the infamous Bender family, who ran what became known as "The Devils Inn."