A slow day for us, a little contest for you 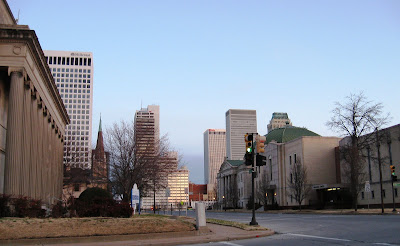 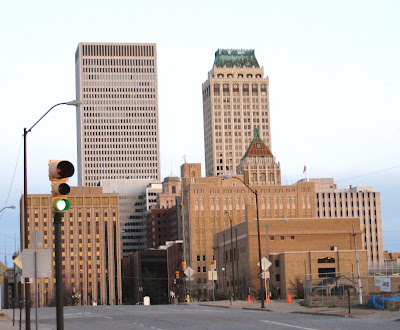 Before leaving for Afton Station this morning, I took a quick pass through downtown Tulsa. It's just a few blocks from my house, and it was a lovely morning with the rising sun bathing the buildings in a beautiful light. After my little photo tour, I picked up Ron and off we went to Afton. One would think that on a pretty day like today we'd have a lot of visitors like we did last weekend, but today just proved that there are no rules, only exceptions, when it comes to the touring public. We only had four visitors, and all of them were relatively local. In fact, one very young couple live just down the street from Afton Station, in the old Rest Haven Motel building, which is now private housing.

Because of the dearth of visitors today, we had plenty of time to kill. Tommy from Bassett's Grocery across the street has posted "CLOSING" signs and announcing all items in the store are now on sale. Nevertheless, the store wasn't open today. Just another layer of sadness. And the lady who has been storing a ton of flea market stuff in one of Tommy's other storefronts spent the day moving it all out of there.

I took the opportunity to begin working on a big sign to put outside the Station -- one that won't blow down like the other one does on a windy day. I got one side finished, but I'm not a bit pleased with it. It's definitely not some of my better work. Ron affixed it to a stanchion and we put it out in it's one-sided state. I'll take a picture of it tomorrow and put it on the blog. It stresses that we're a FREE auto museum. We think that the fact that it's free will draw in more people in our current economic climate.

After that was done, we got a little silly, and this is the point at which a contest was born. Ron happens to be able to very accurately vocally impersonate someone that many people who read this blog know and love. So, I asked him to use that voice to record a message on my answering machine at the Station. Now, if anyone wishes to call Afton Station, listen to the message, and then come back here to the blog and tell me who you believe Ron is impersonating, I'll give that person a Route 66-related prize if they're correct. Believe me, the prizes aren't much, but the first three people to put the correct answer (as a Comment to this post) will get one. If you don't have free long distance, don't even bother. The prizes aren't worth it (LOL!). This is all strictly for fun, of course. The phone number for Afton Station is 918-257-4044. Some of you may find the voice very obscure. Others will know it immediately. Have fun!
P.S. - I probably won't be blogging much in the next few days. I'm going to Afton, then to an Oscar party tomorrow night, then my daughter arrives for a visit next week. I'm excited about that!
Posted by Laurel at 5:21 PM

Of course, I had to call! I suppose if I had to guess, I'd say it sort of sounded like Richard Nixon, but I suspect that isn't correct. :)

I can't wait to see who it is!

How did I know?

Nice work, Ron. A little slow -- almost as if our boy recorded his outgoing message on a 1980s answering machine that needed to have its heads demagnetized -- but not bad. Warm up the timbre and speed it up just a bit and you'll nail it.

Emily,
Any slowness can be attributed to the machine, which actually IS an '80s model, not to Ron. The machine has always slowed down the speech of the caller. In any case, you win one of the prizes since I know that you know that I know that you know who it is...and thanks for not saying it out loud so that others have a chance.

Kathryn - I pretty much expected that you wouldn't make the overseas call for this. LOL! Have fun with your daughter, and I'll have fun with mine. (By the way, you WOULD know who the voice was, so if I don't get three correct answers, I'll send you the third prize.)

Beth,
You've probably never heard this person speak, so you're off the hook. But I'll bet you know who he is! LOL!

I don't know which is more alarming: the fact that I didn't need to call to know what you and Ron were up to, or the fact that when I did call, I was able to correctly identify the age of the answering machine.

I suspect Beth *has* heard The Voice ... just maybe not in person.

Yep, I called even though I pretty much knew who it was from all the "clues" here. Guessing the voice may have been easy but nailing the age of the answering machine shows an uncommon talent. Definitely bonus points for Emily or an NPR style prize: Ron's voice on your answering machine;-)

I was only about 6 or 7 years old when he resigned, so I haven't heard his voice much, but that's my guess.