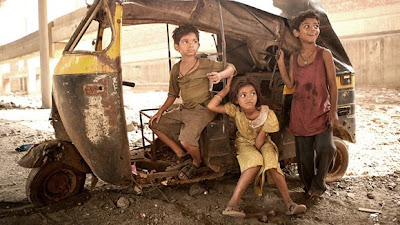 I just got home from seeing Slumdog Millionaire. That makes TWO movies I've seen that are up for Oscars this year, which is pretty amazing, since I usually don't see any of them until after they come out on video. Both Slumdog and Milk, which I saw a few weeks ago, were quite remarkable. I'd hate to have to make a choice between those two! Slumdog had a unique theme, was cinematically perfect, and had a remarkable cast, considering that the children and some of the adults were just folks off the streets of Mumbai and not professionals. But the acting of Sean Penn in Milk, as well as the incredibly moving story, make it right up there with Slumdog in my opinion. I'd like to see Frost/Nixon between now and this weekend, but I doubt I'll make time for that. I'm not as eager to see the other two, The Reader and Benjamin Button, but maybe some day.

In further media news (totally non-Afton Station related!), I had my DVR installed yesterday. Now I feel just a little less backward in the matter of "newfangled technology"
Posted by Laurel at 4:31 PM

As much as we loves us our techie stuff, we don't have DVR! I'm not sure why...I think we were waiting for the new boxes for the satellite or something.

I doubt if we'll see Slumdog in the theater, but we'll definitely get it when it comes out on DVD. Glad to hear you enjoyed it.

P.S. My word verification is "todebeet." I can't think of a meaning, but I think it's a very cute word!

I'm as guilty as the next person of complaining about what I don't have instead of thanking God for all of the Blessings He has given me.

Some people in the world just want enough to eat today, and I complain because my jeans have holes, or my truck is 10 years old (but still running good and it's paid for).

I'd prefer Slumdog to win, personally. I just feel better about the fact that such an amazing movie can be made with not so big names. Makes it easier to avoid prejudgment and have more accurate reviews.