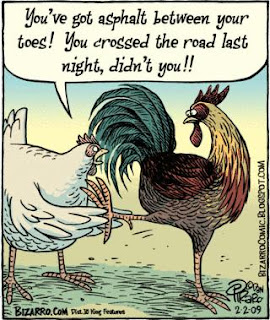 The reason I spent 9 hours in the car yesterday and drove almost 300 miles has absolutely nothing to do with the above cartoon. It may, however, explain the dead chickens in the road on my drive to Afton over the weekend. But mostly, it's just a cool cartoon.
Yesterday, I picked up Ron at 9 and we headed off. There were only two definite goals in mind -- dropping off some Afton Station brochures at the Grand Lake Association in Grove and paying a short visit to Betty in Miami. However, I had planned out a full itinerary which included some interesting places I found last week and wanted to show Ron. We drove between Pryor and Adair and made a few little side trips. Our curiosity led us to follow the signs to a place called Dry Gulch. It was closed for the winter, and we later found out that it's only open at Christmas and for special groups and "retreats". From looking it up on the internet last night, I found that it's a religion-based "theme park" looking roughly like an old Western town. Dry Gulch U.S.A. - The Old West Lives Again
We also took a little side road to see the site of those big summer concerts -- Rocklahoma and Country Fever. Basically, it was just a big field and a huge stage. Rocklahoma
Another jog took us to a large factory we could see in the distance. Turned out to be a division of a very large international cement company.
From there we went to Salina on Lake Hudson, then on to Spavinaw on the other end of the lake. Spavinaw is the birthplace of Mickey Mantle (not to be confused with Commerce, which was his boyhood home). In Spavinaw, there was a large painting of Mickey along the side of the road, a plaque dedicating the road as the Mickey Mantle Highway, and a tiny (dollhouse size) replica of his birthplace. 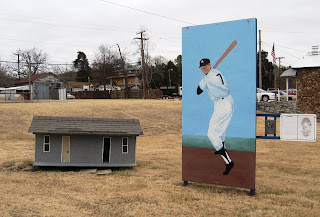 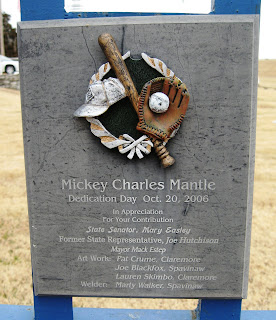 Spavinaw is also the site of Spavinaw Dam, the reservoir which supplies water to the City of Tulsa. It was a gloomy day, and the dam isn't very exciting to look at, but here's the best shot we could get of it. 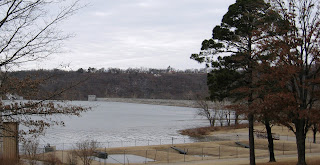 Off we went, passing through Jay, to Grove. In Grove, we had a very pleasant visit with the ladies at the Grand Lake Association, which is akin to a Chamber of Commerce for the whole Grand Lake region. They have a beautiful building and several walls of brochures for travelers. When I admired their array of brochures, they said I could have as many as I wanted (in multiples) of any that interested me, so I ended up with two boxes and one bag of literature to supply my brochure racks at Afton Station for a long time to come.

On through Wyandotte to Miami, where we had a quick lunch at Waylan's KuKu Burger (a good Route 66 iconic burger joint) and then to Betty's house for a short visit. Betty seems to be getting better and better whenever I see her. I'm so glad!

Getting bored yet? It's almost over. After Miami, we took another swing through Welch, still trying to find a house Betty has told me about and which I've mentioned here before. I'm still not sure if we found it, but when we do, you'll be the first to know. It's the house where Johnny Cash wrote some of his songs.

It was a long trip back to Tulsa after Welch, but it was a pretty road and the sun had finally decided to emerge. We got home at 6, with my car running on fumes. I sometimes wonder why I get such a huge kick out of being behind the wheel of my car. The longer the trip, the happier I am. I don't even have to go anywhere special, as long as I'm movin' on down the road. Today was one of those days, and I thank Ron for putting up with me -- although I think he had a good time, too.

I definitely had a great adventure with you yesterday! BTW, did you know that the creator of the Bizarro cartoon series is Dan Piraro, a Tulsa native?

I love it that you enjoy seeing whatever sites you come across. You are a true roadie! I just read an article about curiosity, and how it keeps you engaged and interested in life, and can actually help you live longer! I'm not surprised--I've always thought that curiosity about the world around you was a great trait to have.

I like Grove and Grand Lake, too. I've long thought it's one of the prettiest lakes in the state.