Yes, it's a real Beatles title (although not a well-known one), but it's just perfect for how I feel after the biggest day Afton Station has ever had.   I'm tired but happily so.  It was a truly great day full of wonderful people.

Exactly 111 people crossed our threshold today, unless I  missed a few, which is quite possible.  Two big groups made up the majority of that number.   A Century (100-mile bicycle ride) used Afton as its mid-point, as it began and ended in Joplin, MO, and people were arriving and leaving all day.   The committee came early and set up a table under our canopy where they gave out water, Gatorade, peanut butter sandwiches and bananas to the riders.  The riders came in, used our bathrooms, and looked around at our cars and Route 66 items. 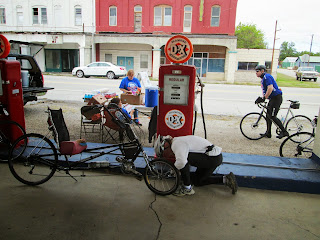 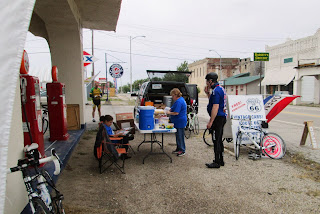 At around noon, our favorite tour guide, Dale Butel from Queensland, Australia arrived with the 40 Aussies in his fall tour.  Most came on motorcycles, but a good number chose the luxury of automobiles, too. As usual, they were a charming group having an immense amount of fun, and of course it's always great to see Dale again.  Here he is with his beautiful wife, who accompanied him on this tour. 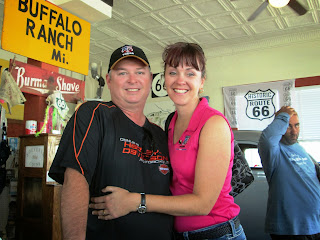 These four guys from Gouda in the Netherlands (yes, from whence comes the cheese) were quite excited about the flags we sell, and in fact bought them ALL! 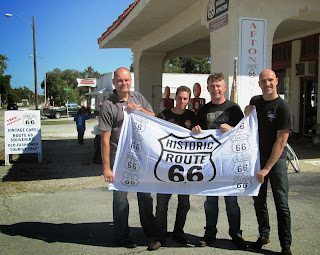 And here is a family from Adelaide, Australia, not part of Dale's group but certainly having a great time on their own. 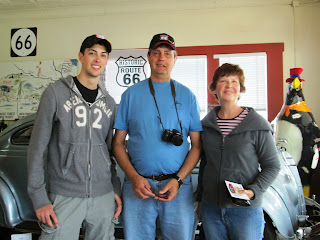 Some local kids came in with an absolutely adorable little 8-week old puppy who happens to have been born blind.  They are looking for a good home for her, and oh, what a temptation.  Sweet puppy!  I hope they find a loving family for her soon. 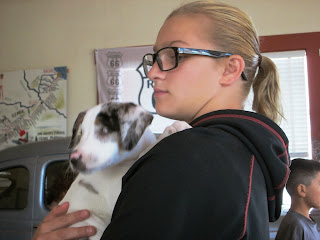 Toward the end of the day, when we were almost ready to close up and make our weary way home, a group of young women who were at the tail end of the 100-mile bicycle run pedaled into the Station.  They were in a celebratory mood and waving the flag in the middle of Route 66 was part of said celebration. 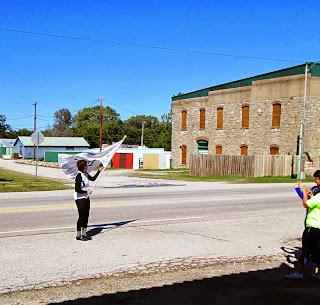 Ron M. was with me all day and was a tremendous help, setting up the table for the bicycle group, going up a ladder to get the last of the Route 66 flags when the guys from Holland wanted to buy them all, leading all 111 people to the car showrooms, etc., etc., etc.    Betty came in at a perfect time too, as she was able to help with the long lines which were forming at the counter with people wanting to buy things.  Did I mention that we hit the highest one-day sales total EVER!   Nice!   Robin had a banner day yesterday, too.  Things are hopping!

I will sleep well tonight for sure, but then Ron M. and I will be back in Afton bright and early tomorrow.
Posted by Laurel at 6:21 PM

Wow, what a great day for you and Afton Station!

Yeah , its really great day for you.