The southern hemisphere might not be across the universe, but it's mighty far away,  yet the citizens of Australia and New Zealand continue to visit Route 66 in large numbers.  At Afton Station today, we had visitors from both. 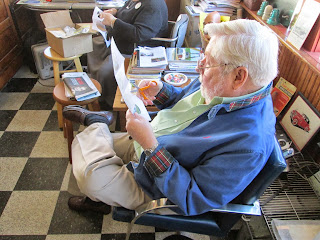 But first things first.   Our Tulsa friend Joe Meeks rode up to Afton with us this morning and spent the day.  I put him to work cutting out designs for the magnets which I make.  As a celebration of his visit, we treated ourselves to the yummy barbecue pork sandwiches on ciabatta bread from Nowhere on Route 66 down the road.Yum! 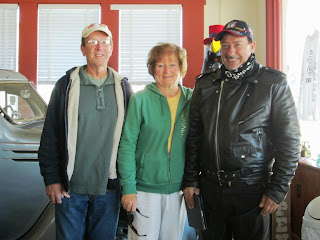 A solo-traveling visitor from Sydney, Australia (on the right) made instant friends with this couple from Raymore, Missouri.  It was probably because all of them had equal interest in their Mother Road travels.  The Aussie gentleman spends a lot of time in the U.S. on business, but finally he is able to do something he's wanted to do for a long time, cruise the heartland on his newly-purchased Harley. 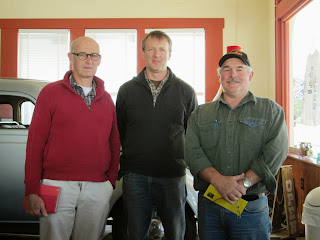 .More Aussies,  this time from Ballarat and Sebastopol, near Melbourne.  They are part of a group of several car loving Australians who are seeking out vintage cars along Route 66 and have also visited the Hershey Show in Pennsylvania and the Indianapolis Speedway. 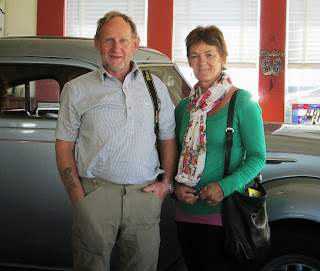 From near Wellington, New Zealand came this couple, also traveling east to west on the Road. 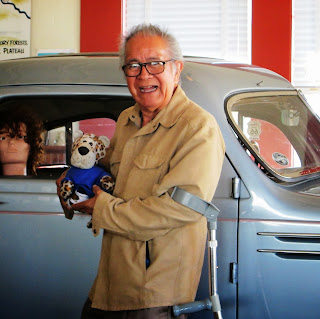 One of my favorite guests, Robert Owle from Muskogee, OK came with his friend from Fontana, California  and has been here several times previously.  This time he brought along his other traveling companion, a tiger whose name I have forgotten but who was wearing  Tow Mater socks and a Snuggie.   He accompanies Robert wherever he goes and gets photographed at each stop.

This license appeared on one of the cars in our parking lot today.  Ron M. took the photo and I'm not sure as to which car sported it, nor do I know if it refers to the car or the persons within, but I like it !! 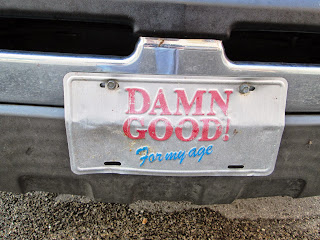