Scientists haven't announced it yet, but surely they're able to discern a slightly unusual tilting of the earth recently brought about by the migration of Australians and New Zealanders from the Southern hemisphere to the Northern hemisphere, specifically to Route 66.   I'm sure it must be true!  They're everywhere!  And oh, how we love it.  Today was another day of visits from perfectly great folks from Australia. 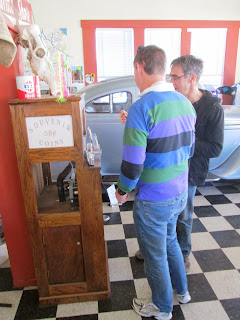 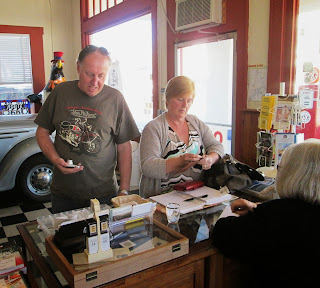 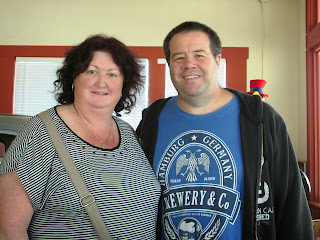 In the top photo, guys from Ballarat, Australia are becoming enchanted by the pressed penny machine.  Since 1c and 2c coins have been discontinued in Australia, they were especially interested in our pennies, plus the fact that the machine is legal.  In their country there are stiff penalties for defacing currency.  In the second photo, a couple from Ballarat traveling in tandem with the previous two guys, are deciding what to purchase.  They're all part of the 4-car group, some of which visited yesterday, all of whom are spending their time in the U.S. both on Route 66 and at other venues that feature vintage cars.

The third photo shows a couple from  near Sydney, Australia traveling on their own. 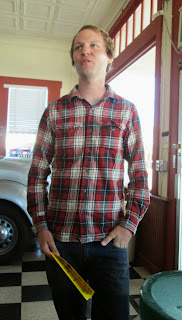 The rest of the day, people from the following came for a visit:  Shidler OK, Charleston AR, Monkton New Brunswick Canada, and Sioux Falls, SD.   The gentleman from Arkansas was driving a beautiful '56 Ford pickup and has more oldies at home.  He was in Afton because he has relatives here.  The man from S. Dakota, accompanied by his pup Smoky, was here because he also has relatives in Afton.  The folks from Shidler, OK were in a big '42 ft. travel trailer, returning from an Arkansas vacation. 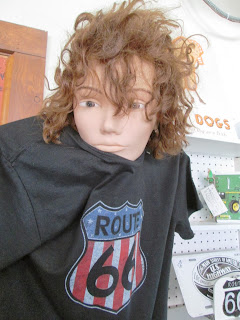 Our crazy lady tried on one of the t-shirts today.  Now she's even more scary!