Pictures from a Trip

Having returned from the tire store and not needing to leave an arm and a leg there to pay for my new tires, I have to say that those tire guys are some of the nicest business proprietors I've dealt with for a long time.  On a very rainy day, they did quick work and made sure I was sheltered from the rain while going to and from the car.  And it all took place in one short hour!

So, now I'm ready to talk about yesterday's trip.   It was supposed to rain yesterday, but we were spared although we had a mostly cloudy and gloomy day.  I picked up Ron M. and our friend Joe in the morning and we drove to Barnsdall for breakfast at Garrett's, a small cafe/convenience store.  By the looks of the locals when we came in, I'm pretty sure we were the first "strangers" to darken their door for a while.  Good breakfast! 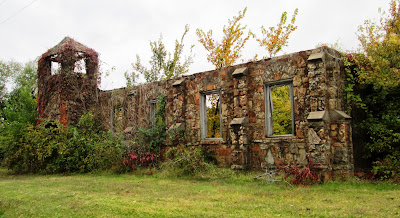 The ruins of an old Gothic stone church was our first point of interest.  One wonders why such a grand church was built in the countryside so far from a town of any size.

I've come to observe that small towns (with the exception, of course, of Afton, which doesn't seem to have much interest) like to put up signs at their borders that brag about their towns.   Ramona is a tiny, tiny town with a BIG overhead sign! 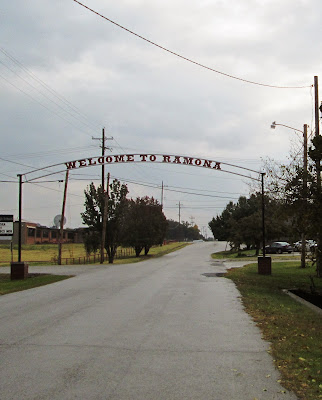 Barnsdall has pride in its two famous citizens.   From what I hear, Gable only lived there for a short time and Bryant, well, use your own judgmment as to whether the woman deserves to be so honored. 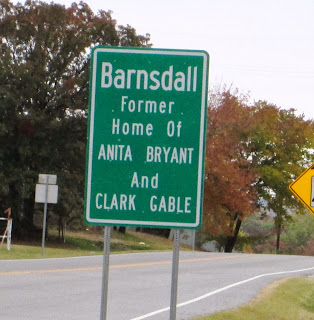 Barnsdall once was named Bigheart, after a Chief of the Osage Nation, but later the name was changed to honor of someone in the mineral and oil business. 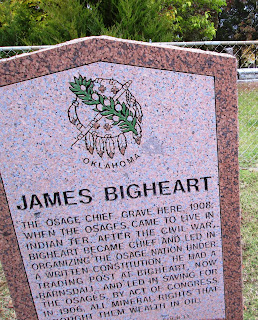 One of our main trip destinations was to the house, in an even tinier town called Boulanger, where the about-to-be distributed movie "August, Osage County" was made.  The film stars Meryl Streep and Julia Roberts and was produced by George Clooney, so for the better part of 6 months these big names resided in the area. The actual house they used is far out in the middle of nowhere, but thanks to Joe's good directions we found it.  It's a beautiful old plantation-type structure which has fallen on some disrepair but is on the market right now.   The film is being talked about as a potential for a number of Oscars, so perhaps Boulanger will make it on the map some day. 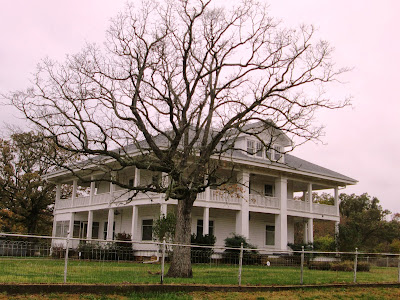 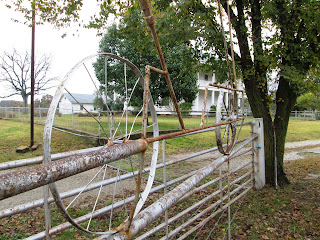 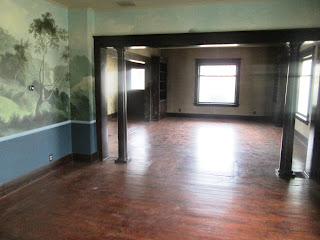 Ron M. took  the opportunity to swing on the same swing that was used in the film. 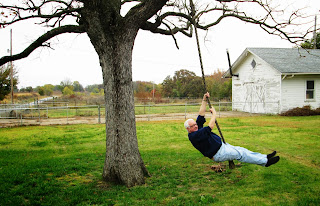 The tree from which the swing hangs was moved from one side of the front lawn to the other in order to make a better foreground for the house.  I had read that it was one of the largest trees to be transplanted in the memory of the company who did it.  In the background, you can see a bit of the tiny country road that leads to the home.

Meanwhile, this citizen has a somewhat overblown way of telling snoopers like us that, for a while at least, some of the biggest stars in America were hanging around their one-street village. "Movie Capitol of Oklahoma" indeed! 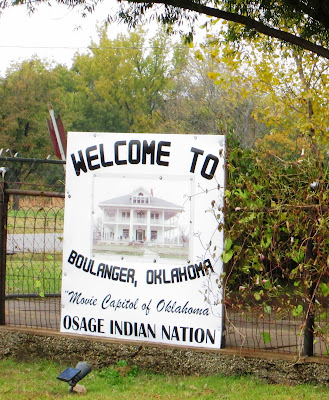 We met our friend Jean at a Mexican restaurant in Pawhuska, and she brought with her a brand new grandson, TJ, and his mother Gretchen.   Here is Ron with TJ and Joe and Grandma Jean with the cute little guy.  He was very well-behaved as we adults chowed down on massive amounts of Taco Salad and other goodies. 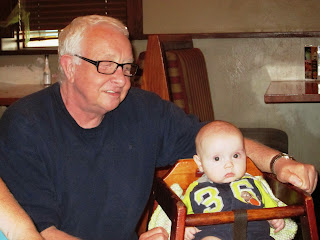 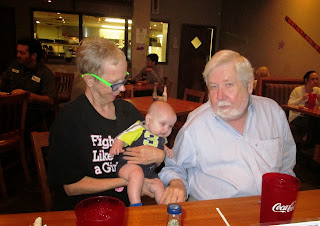 After lunch, we drove up to the Tall Grass Prairie Perserve, a place I've written about a number of times in this blog (Search:  Tallgrass).   This visit, however, yielded NO bison sightings whatsoever!   It might have been roundup time, when all the bison are herded into one place for culling and innoculations.  Not sure about that.

You know the rest.   Flat tire.  The middle of nowhere.  Threatening skies.   Etc.    Here's where it occurred.  We were surrounded on all sides by the Drummond Ranch, one of the largest ranches in the country, and home to Ree Drummond, cookbook author, blogger, and TV star. 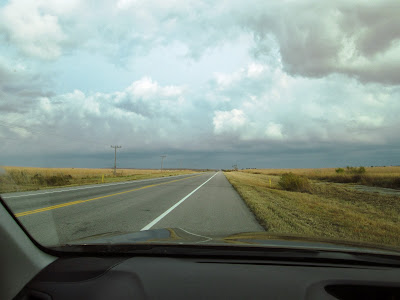 From there, it was homeward bound.   Even a flat tire couldn't spoil such a lovely, restful day shared with friends.
Posted by Laurel at 3:16 PM

It was great seeing you yesterday. So glad you got to meet TJ and Gretchen. Tough luck about the tire.
Jean

Great to see you too, Jean, and to meet the adorable TJ and his mom Gretchen. Lets do it again some time soon!

What a wonderful outing with great company. Sounds like fun all along the way. As to the disappointment of seeing no bison, it is round up time for annual checkups and inoculations. I know this because when the Churchills were visiting from the UK two years ago we went to the Tall Grass Preserve in late October and the only buffalo to be seen were in a holding pen a long, long way from the road. No mention of the world famous oil well in the middle of the street in Barnsdall. Did you drive through town or around it?

Apparently they changed the roundup time. The last time I took friends to the Tallgrass and missed seeing bisons was the week before Thanksgiving, so I just assumed it would be the same this year. Oh well, the guys with me have both been there many times before. As for the Barnsdall oil well, we didn't pay much attention to it because all of us have seen it so many times before. We drove through Barnsdall and I felt that although I was there less than a year ago, it seemed to have gone downhill a bit, with more empty storefronts, etc. That's always sad.