For once, I really don't have much to say about today.  It was a good day at Afton Station (but then again, aren't they all?), but it was a bit slow.  To be honest, Ron M. and I rather enjoyed the slowness.  We had 16 visitors, but they came at such a well-spaced pace that it seemed to be almost pre-planned.    Our visitors came from West Hills CA, Grants Pass OR, Lincoln NE, Kansas City MO, Anadarko OK,  Muskogee OK, Lexington KY, and Port Elgin, Ontario Canada. 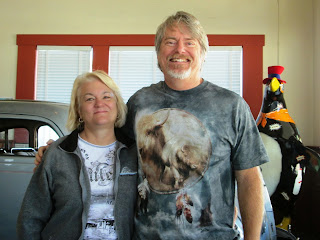 The couple from West Hills CA were first, and what interesting and motivated folks they were!  Talking to them just briefly assured us that they were doing the Route "right".   They're not missing much and seem to be enjoying what they've seen.

A mom from Kansas City MO arrived with her three grown daughters from Lincoln, NE.   The three girls always take a "sister trip" together, but this year their mother retired so they invited her to go along on Route 66.  A fellow from just up the road in Miami, OK who has visited Afton Station before brought his visiting friend from Grants Pass, OR who happened to be a major collector of vintage Fords and has even built himself a repro Texaco gas station near his home.  Photos he had assured us that his place is pretty darn incredible!

Some folks from Lexington, KY came in and I pounced on them for current info about a place I lived for quite a few years of my early life.  Glad to hear my high school is still standing!   They happen to live very close to where my parents and I lived when I was in high school in the '60s. 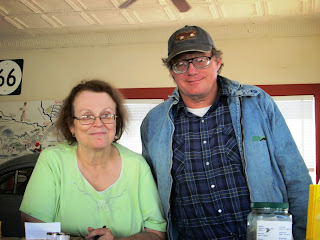 My friend and faithful blog reader James Rigler (hi, Jim!) stopped in near the end of the day and brought along his friend Charla.   It was nice to meet Charla and always fun to chat with Jim.  They drove up from Muskogee, OK and were able to stay for a while before we closed up.

Also at the end of the day came the couple from Anadarko, OK and Port Elgin, Ontario.  Lovely people all.
It was a perfectly beautiful day today -- cool, crisp, and sunny.  Wish we could have many more like this before the winter chill sets in.  I also hope we have many more days filled with such nice folks as we greeted today!  ( At the beginning of this post I said I didn't have much to say.  Hmm... .guess I was wrong!)
Posted by Laurel at 5:54 PM