Empty.  That's how I always feel for a time after my daughter Sarah leaves here following a nice visit.  It was a very wonderful visit, and right now she's on a plane heading back to Chicago.  Boo hoo!   It's funny how that empty feeling when they leave never goes away, from the time they're born until they're, well, a few weeks short of 40 years old. 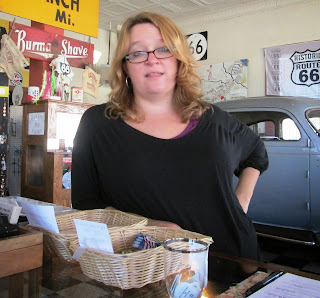 But, things went on as usual at Afton Station today, and once again it was a good -- but not crowded -- day.  We had some intriguing visitors from Beijing, China.   Two young couples were super excited about visiting Afton Station because they'd seen it in a Japanese (not Chinese) movie that was made here, in part, a couple of years ago.  Their excitement increased when they immediately recognized Tattoo Man (who happened to be sitting there) because he had been featured in one segment of the film.  Apparently, though we didn't previously know it, the Japanese fellow who was the "star" of the film is extremely well-known all over Asia.  Tattoo was thrilled to be recognized by the folks, but not quite as thrilled as they were about being at Afton Station.  In fact, one of the beautiful  young ladies in the group was wearing a traditional dress that she had put on just for the Afton Station visit. 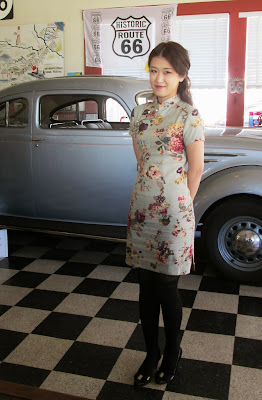 And here are the other three, who were fascinated by Tattoo's back and by the pressed penny machine. 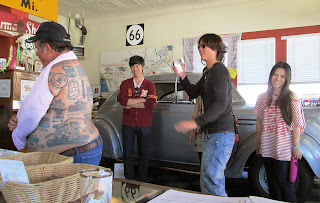 We also had visits from folks from Indianapolis IN, Bentonville AR, Bella Vista AR, Caldwell ID, Calhoun KY, and Livermore, KY.  Betty came to say hello to Sarah, and of course Ron M. was with us.   I'll be heading back to Afton tomorrow after dialysis to meet up with my college roommate who, after over 25 years, called today to say she and her husband will be in that area tomorrow.  Can't wait to see Barbara after all these years!
Posted by Laurel at 6:09 PM

Aww shucks, I forgot again! Duhhh! I guess there was just too much happening yesterday.