. . . was the sound at Afton Station today when a group of four great guys from the Netherlands arrived, and one of them was wearing wooden shoes!   That's a first for us.  I was given a pair of wooden shoes by Dries Bessels when he visited, but this is the first Dutch visitor who said he wears them all the time.   (The Dutch word for wooden shoes is "klomp" or, more properly, "sabot"). Very interesting. 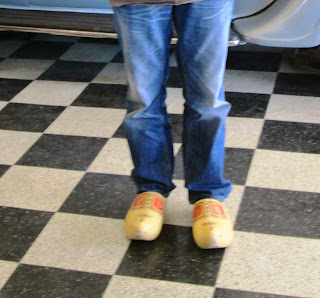 Here's the whole group of happy Dutchmen.  We liked them!  Second from the left is the wooden shoe wearer.  The rest sported more Americanized footwear.  They had been to the Henry Ford museum in Detroit and are now on Route 66 looking for more cars, cars, cars. 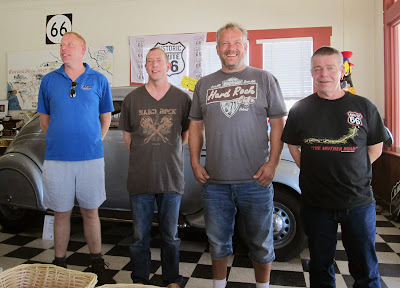 It was a very quiet day on Route 66 today, at least in Afton.   We had a mere 14 visitors, most of them in the afternoon.  They came from Brooklyn NY, Moore OK, Rogers AR, Konawa OK, and Davenport, IA. 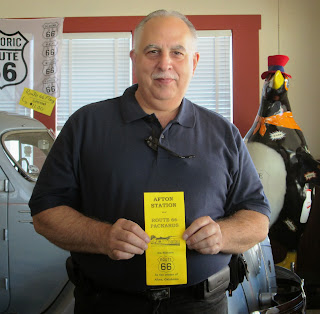 Our one early visitor was Glenn from Brooklyn, NY.  He works for the Mayor of NYC's office and was quite the interesting gentleman.  Another car guy, he has four or five vintage vehicles himself, and was heading off to gaze at more cars, too.  It was definitely a car day today. 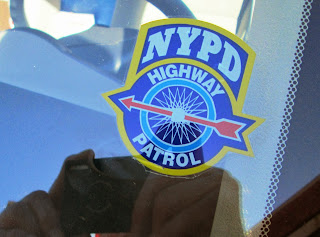 The two men from Rogers, AR on the other hand were "railroad guys", hoping to have a train or two go past as they visited the Station.

This is the first of what might be several days of very short or even nonexistent blog posts.  Today I got home late and have a lot to do because tomorrow my daughter Sarah is coming for a 5-day visit.  That always means I'll be having too much fun to promise a daily blog.  I'll try, but we shall see.
Posted by Laurel at 6:13 PM

Laurel, don't worry about us. We'll be here and ready to be entertained with Tales from Afton Station after Sarah's visit. Have fun.