As it turned out, we had a good day today but we sure didn't beat yesterday for quantity of visitors!   Marly hosted 73 visitors while I was having a great time in Oklahoma City.   His wife Sue helped out all day, and I'm hoping Sue will want to do so in the future, too.  Tattoo Man was also there to observe the crowds, which included Jim Conkle's bus load of folks from England.

It would be hard to beat yesterday, but Ron M. and I were met at the door when we arrived by three Australian citizens, so we knew from the start that it would be a great day.  They're from Warellan, NSW.   Love their bumper sticker, obviously specially made for their trip in order to "personalize" their rental car. 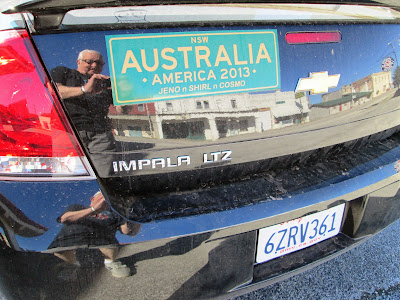 All three are self-described car nuts, so they enjoyed our collection.  They admitted that they are driving Route 66 not so much to see the usual iconic places, but instead to visit junk yards and car shows and automotive flea markets, looking for car parts.  Well, that's one way to see Route 66.  Different strokes for different folks!   Here they are musing over the purchase of a guidebook. 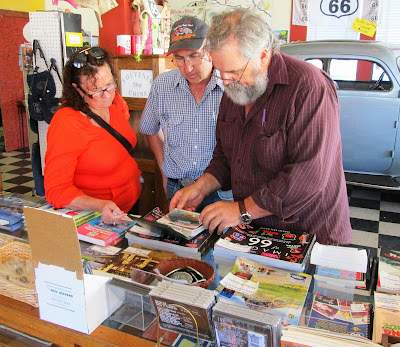 Later in the day, an 80-year-old gentleman who grew up in Afton came in with his daughter and son-in-law who just moved to Springfield, MO from Puerto Rico.   The daughter also grew up in Afton, so it was good luck that Betty W. arrived shortly thereafter and there was a great reunion!   I love it when Betty is reunited with folks she hasn't seen for years.  In this case, it was 30 years since she saw the daughter.  They spent a good amount of time chattering about the past. 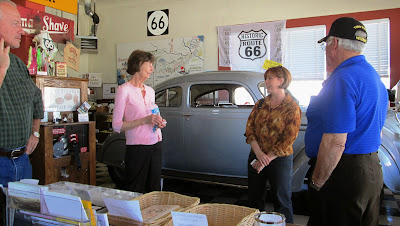 We also had visits from Tattoo Man and Phil.  So good to have Phil back in town, although only for a few weeks.
Posted by Laurel at 5:27 PM