And now, for something a little different. . .

While Marly was busy handling crowds at Afton Station today (one group alone had over 30 people, he said), I was in Oklahoma City speaking to a meeting of Oklahoma County Retired Educators.  There were over 70 people in the group, and three guesses what my presentation was about . . .yep, Route 66!


I took my support crew, Ron M. and Joe Meeks, along on the 100-mile drive, and we arrived at 9 a.m. at the gigantic Christian church at which the monthly meeting was to be held.   From a distance, it looks like a huge egg is emerging from the ground. 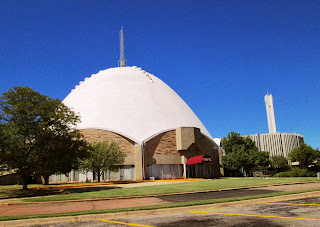 We arrived early to set up the projector which had the daunting task of projecting my Power Point presentation on a screen that reminded me of the screen we had when I was a kid.  However, the Power Point certainly made it a lot easier to progress from photo to photo, so I remain enamored with modern technology.

The table settings were ingenious and must have taken months to make!  The theme was "Sailing Into 2014". That's a pan of water with a little sailboat floating in it. 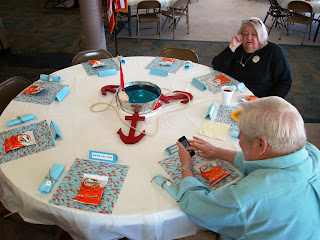 And here are Ron and Joe waiting for things to begin and munching on the large array of snacks available. 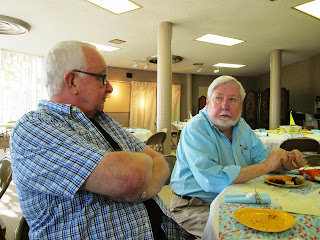 I have reason to believe that my talk was well received.  I wasn't particularly nervous, but I did decide after it was over that I should go back to my old style of speaking extemporaneously  rather than working with a script. In any case, I hope I got a lot of the folks there eager to take a trip on Route 66. 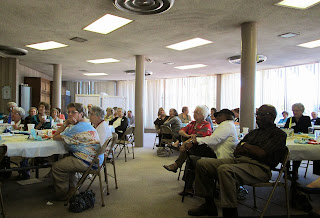 After the presentation, we listened to a short business meeting then enjoyed a very nice buffet luncheon.   Thank you so much to the folks at the OCREA for treating us so nicely.  Afterwards, we hopped back into the car and Joe took us on a great tour of Oklahoma City.  He's far more familiar with it than are either Ron or I.    OKC is certainly a city that is seeing enormous growth, and in all the right direction.   Very impressive!  Since we'd taken the interstate to get to OKC in the morning, we decided to take old Route 66 back to Tulsa.  It was a wonderful ride on a beautiful day.  As far as I'm concerned, every ride on Route 66 is wonderful!

Marly just sent these pics from his day at Afton Station.  I see Jim Conkle brought his bus tour to the Station, and I also see that Tattoo Man stopped in to visit with them.   Jim is a veteran Route 66er from California.  Wish I'd been there to see him! 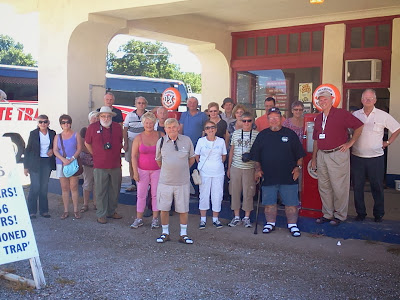 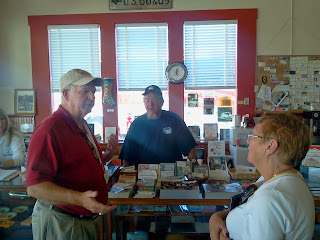 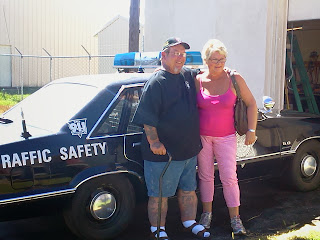 Congratulations on another successful presentation, Laurel!

Who's old Ford police car is in that last photo?

The police car is a vehicle we're "boarding" for a while for a friend of David's. It certainly doesn't go with our collection, but it is what it is. :-)