Well, it just goes to show what I know. . . or DON'T know.  When our first visitors to Afton Station arrived today, we thought they had driven a vintage Dodge Challenger.  But nope, it was brand new!  The couple from Manchester, England had rented it in Chicago for their Route 66 trip.  I had no idea that Dodge had recreated the Challenger and it sure looked, from where they parked it across the street, like an oldie.

Here's the one they drove today with the vintage model below. 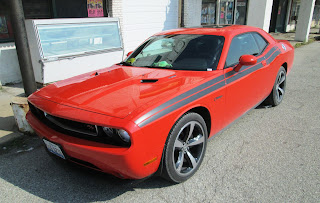 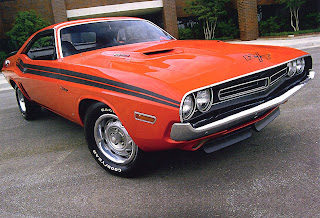 A more discerning muscle car lover would of course know the difference, but not me!  I know virtually nothing about the genre.

Another couple arrived in an interesting car today, as well.   They're from Riverview, Michigan (near Detroit), but flew to Phoenix to pick up an '87 Corvette which they purchased there.  Now, they're driving home in the 'Vette and enjoying every minute of time in their new wheels.  We had a nice talk about the demise of the Packard factory in Detroit, 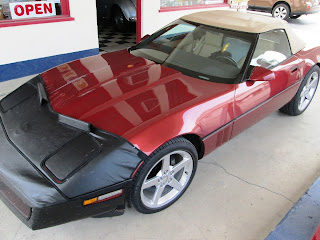 It was a fairly quiet day today.   Ron and I had a lot of down time, in which I completed two Sunday crosswords and he caught up with a pile of magazines.  We did have a nice group of visitors, however.  Other than those mentioned above, the others came from Bethany Beach MD, Broken Arrow OK, Port St. Lucie FL, Adelaide Australia, Greenwood AR, Peru IN, and Kokomo, IN. 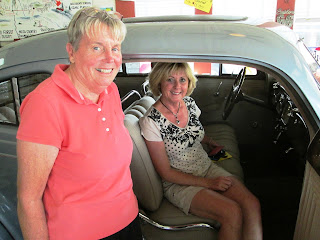 These two friends from Indiana are venturing across all of Route 66.  We suggested they stay at the Campbell Hotel when they get to Tulsa tonight and perhaps also try the brand new Maxxwell's Restaurant in the hotel.  They have a month for their trip and expect to return via the Lincoln Highway. We also asked them to give a shout out to Dan Rice when they get to the Santa Monica pier. 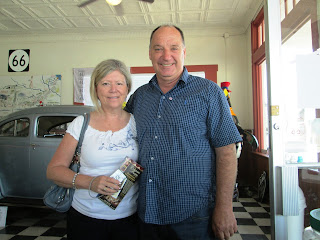 Finally, this Aussie couple is also traversing Route 66 and were buoyed by the lovely (almost cool) weather we were having this morning.  It did heat up by the end of the day, but we never turned on the a/c and were reasonably comfortable all day.  Can fall be near?

I tried to leave a comment on this article, but I thought it was just our computer.

Interesting that the couple who had the Challenger told us that the company they rented from would not allow a "drop off" in LA and they must return the car to Chicago.