It was definitely a NO FLAG day at Afton Station!   In an effort to keep the flags from becoming tattered pieces of cloth flapping in the unrelenting wind, I left them inside -- and then worried that people wouldn't come to visit if they thought I wasn't open.   Every time the wind collided with my front door, the doorbell was activated, and that's always fun.   Ding, ding, ding all day.  If every one of those dings represented a visitor entering, it would have been a record day for sure.  Alas, that didn't happen, but we did have a bunch of 10 darn good visitors... and here they are! 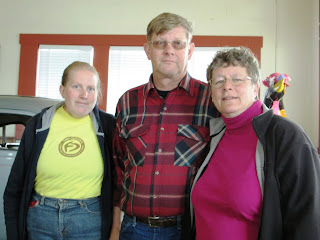 This is a family from Arvada, Colorado.   They thought they were escaping the wintry weather near Denver, but instead ran into 20-degree temps in Amarillo yesterday and the frigid cold wind and rain in Oklahoma today.  Undeterred, they pressed on. 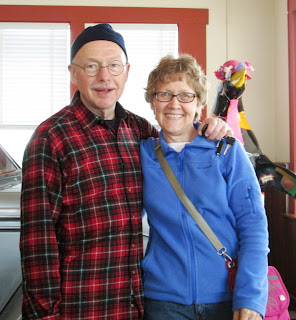 These two jolly travelers are from Baraboo, Wisconsin.  I remember Baraboo from our Wisconsin vacation several years ago.  It's known as the Circus City because it's the home of the Circus World Museum.  These folks are heading west.  They came in to ask directions to the closest saddle shop, but stayed and became enchanted by the old cars, in particular the motor  home. 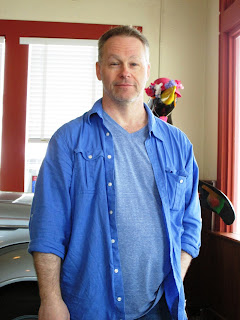 Here's Kevin Kane.   No relation, although his dad's name is David M. Kane -- exactly the same as my ex, David!   Anyway, he's from Halifax, Nova Scotia, which is one of my favorite cities.  We had an interesting talk about how much more difficult it is these days to cross the US/Canada border than it used to be.  He's going "as far as he gets" on this trip. 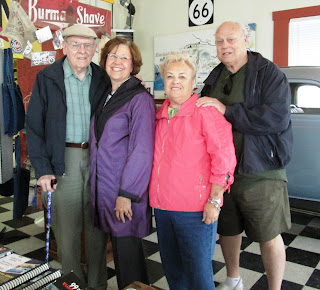 Finally, the couple on the left from nearby Grove, OK brought their friends visiting from Orange, California to see the cars.  They've been here before and liked it well enough to want their friends to have the pleasure.

Our visitor numbers have been uncharacteristically low this April, and I don't quite know where to assign the blame.  I haven't heard any rumors about my evil personality keeping people away, so I've narrowed it down to 1) the weather or 2) the economy, but since gas prices are falling and the economy is slowly but steadily improving, I can't really accuse the economy for taking my customers. Therefore, it must be the weather, which really HAS been pretty wretched this month.  Unseasonable cold, several rainy days, storm threats, and actually only two days so far this month that would be suitable for the motorcycle riders who make up much of my visitor log.  I look forward to May, the transitional month that brings me right up to the point where I can start complaining about the heat!
Posted by Laurel at 5:44 PM

"I look forward to May, the transitional month that brings me right up to the point where I can start complaining about the heat!"

LOL...There's always something to look forward to, isn't there Laurel!

You don't have an evil personality. It's just your left-wing politics that's wrong. :D

Dave -- In Oklahoma, there's some new weather-related incident just about every day!

Trevor -- We Liberals are an evil bunch for sure! But how boring the world would be if we didn't have Conservatives to practice our evil on! :-)