It's that kind of a day, so expect a lot of disjointed thoughts.  It began at dawn.  Beautiful sunrise, followed almost immediately by drizzle, then just clouds and gloom.  Mother Nature playing tricks.  Here's the sun rising behind the Oasis Motel on 11th St. (Route 66) in Tulsa. 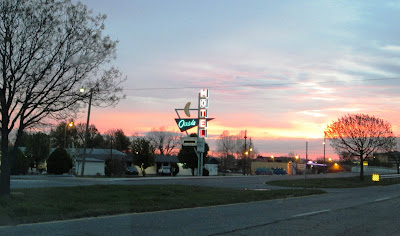 I was restless and somewhat distracted all day, although things improved when my first guests arrived..  They were a very sweet family from Langley, OK who were returning from acquiring a full truckload of mushroom soil from the mushroom farm in Miami, OK.   They're planning a big garden this summer, and I'm jealous.  My postage stamp yard could never accommodate a decent garden, and I miss digging in the dirt.    The Langley family included an adorable and polite little kindergartener who seemed interested in everything at the Station, particularly my little Tow Mater toy! 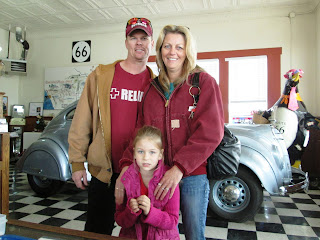 The folks from Har-Ber Village came to take the T-Bird we've been keeping for them.  The gorgeous car will be raffled off in September, and we've been selling tickets for them.  Today, they were taking it to the Pelican Festival to reach a new audience for tickets, but it will be back.  They tell me that not a lot of tickets have been sold, so if anyone is interested in taking a $25 chance on a 2003 red T-Bird convertible with fewer than 250 miles on it, let me know.  At this point, the odds of winning aren't too bad.

By noon, not much else had happened at the Station.  There were a couple of calls from friends, and another friend dropped in briefly.  Scott came by on his way to the recycling place with a load of scrap metal.  I cleaned out the file cabinet and got rid of a ton of old receipts, etc.  Ron M. got home from his vacation yesterday but stayed home today with the beginnings of a head cold. I called to see  how he was doing, and he's ok. I hope he comes to Afton with me tomorrow.

This group drove over from Siloam Springs and Gentry, Arkansas... another case of roaming around on what materialized into a nice day for a ride.   They enjoyed the cars very much. 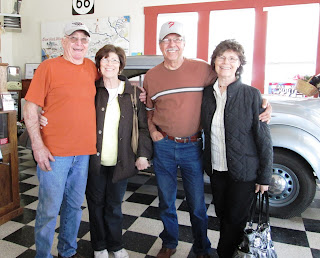 Other visitors (a grand total of 15) came from Grove and Tulsa, Oklahoma and Fayetteville, Arkansas.

When I picked up Ron M. at the Tulsa airport yesterday, he pointed out that there was an incredible -- and large! -- new Route 66 mural on the concourse!   He snapped this photo of it.   It's extremely well executed and colorful, two attributes that don't really show in this photo.   Come to Tulsa and check it out.  It's so nice to see all the new tributes to Route 66 in our city.  I'm proud of Tulsa! 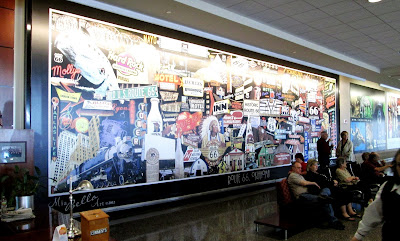 Well, it appears that the huge art at the airport has been there almost a year! I've certainly never noticed them (there are two, one in each baggage area) nor heard anyone mention them.

Some info on the airport art installations can be found here: