A Touch of Pink

As I drove to Afton early this morning, a touch of pink on the horizon signaled the sunrise.  I caught it moments before the sun peeked out ahead of me as I drove east on Route 66. 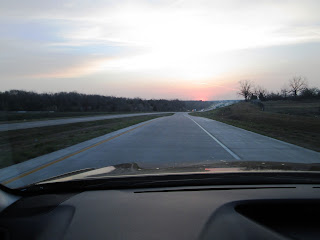 It seemed like a busy day today, but I guess it was mostly just busy in the morning.  I had visitors, almost immediately, and I also had a lot to do to catch up after yesterday at the Retro Show.  Robin came in while I was chatting with some folks and put away all the merchandise we brought back from the Show while I was occupied with the visitors! Therefore,  I got out of doing a lot of work!  It was a great help.  Robin is a real workhorse and a wonderful person to have around the Station.  Unfortunately, she had to leave shortly thereafter, but she did so much this weekend that she deserves a day off.

My first visitors were from just down the road in Fairland, but they've just moved there and are making it a habit to explore the area, including Route 66.  We are pleased that they chose Afton Station as one of their first explorations.  Sarah and Mark have a company called Havok Fingerboards (havokfingerboards.com) which makes tiny "skateboards" that kids operate with their fingers.  They said their endeavor is doing well. 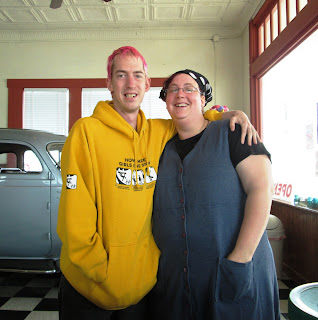 Another couple came in shortly thereafter.  They're from Hasselt, Belgium and are traversing Route 66 in a rented RV from Cruise America.  They're enjoying the trip so far, despite some minor troubles with the RV.  He speaks good English as well as French, Dutch, and German, but their main language is Flemish. He told me how to say "Welcome" in several languages.  That will come in handy this summer, I'm sure!
We also had some wonderful visitors from Reeds Spring, Missouri and Otis, Kansas as well as three of my favorite young people from Afton.  It was a fine weekend, indeed!