The sun never appeared outside Afton Station today, but it was sunny and happy inside!   We were all so excited to see Ron "Tattoo Man" Jones appear for the first time since his major surgery about 6 weeks ago.  He drove there himself and we all commented that he looked great -- actually much better than we would have thought after his illness.  He hung in with us most of the day! 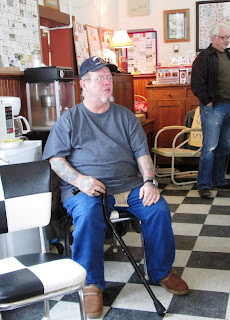 It was another good day on Route 66, with 19 visitors who stopped in at the Station.   A man from Jacksonville, FL arrived in this rig, a beautiful bike trailing a colorful, decorated trailer. 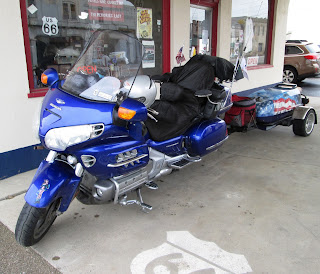 This couple from Miledgeville, GA also stopped in.  They were spending the week on Monkey Island and decided to do a little Route 66 exploration. 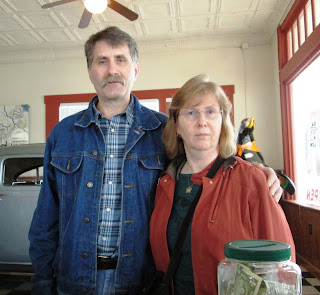 From a little further afield, this couple hails from Trowbridge, England.  They're enjoying a Route 66 holiday which will end just short of California. 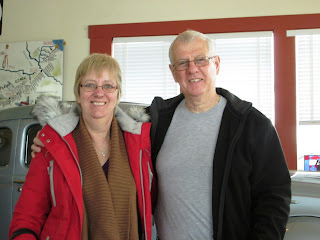 A mom and these three kids from Fairland, OK came in for a visit.  They were on their very first geocaching expedition, and ours was the first cache they had ever found!   Quite an honor for us!   The kids were equally as excited about the penny squashing machine, which they all tried.  Here they are, displaying their pennies. 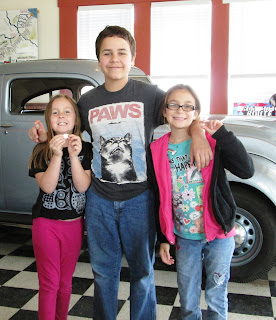 Near the end of the day, four gentlemen on their way home from a Volvo Owners Meeting arrived.  They were from Webb City MO, and Bentonville, Bella Vista, and Fayetteville, AR.  The Volvo group is just forming and they had their second meeting today at Clanton's in Vinita.   The  young man on the right, a high school senior who is mere weeks from graduation, is the President of the new group.  How great!!  I invited them to come with the rest of the group on a cruise this summer. 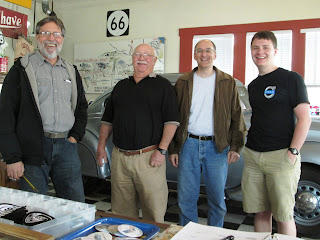 There were also visitors from Clarksville AR, Newport News VA, Ann Arbor MI, and Newfoundland, Canada today, as well as "regulars" Betty, Marlene, Robin, and Marly.     I will not be at the Station tomorrow because Ron M. and I will be attending the Board meeting of the OK Route 66 Association in Oklahoma City.  So, don't expect a blog post for tomorrow.... unless I decide to report on the meeting.
Posted by Laurel at 6:04 PM