What I Learned Today

I learn a lot at Afton Station, both from doing a good bit of reading between visitors or, more often, from visitors.  Today I learned both ways.  In the morning, I learned that David Sedaris, one of my favorite writers and humorists, has a new book out.  I also learned that the Packard Proving Grounds in Michigan has received National Register of Historic Places status.  (That's where new Packards were put to the test back in the day.)

When the visitors began to arrive, this very congenial young couple from Ballant, Australia (near Melbourne) explained to me -- finally! -- why Australians like Ford Mustangs so much.  It has to do with production in Aussie Land in the mid '60s.   A very limited number of Mustangs were sent to Australia in the mid '60s, where they were converted to righthand drive using Ford Falcon parts.  The people of Australia have been charmed by Pony Cars ever since.  There's more to it than that, but those are the basics. 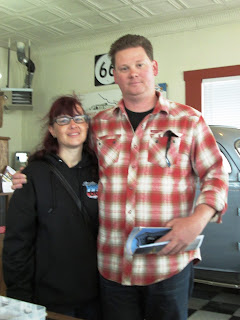 Later in the morning, I learned a lot more -- and  had fun doing so!  A couple from Derby, Vermont arrived at approximately the same time as another couple from Hawthorne, Florida.  A major gabfest ensued!  There was much exchanging of stories of road trips past and present, photos, and advice about future road trips.   The Vermonters were heading west to the Grand Canyon, and the Floridians, very experienced travelers, had lots of tips for them.  Coincidentally, the Florida couple had been visiting Vermont, just a few miles from the home of the Vermonters, when all of them  experienced Hurricane Irene in 2011 which devastated that part of the state. 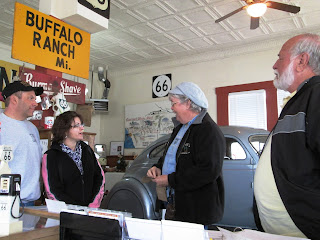 What did I learn?   From the gentleman from Florida, I learned a new word which I plan to use as often as possible.  "Wobblypop" - an alcoholic beverage, as in "He had too much wobblypop!"  Ha ha ha!

From the guy from Vermont, I learned what it's like to to drive one of those huge, 115,000 pounds (full) logging trucks through the Green Mountains in often nasty weather.  Here he is, showing a photo of his truck to Betty, who shared in my learning today. 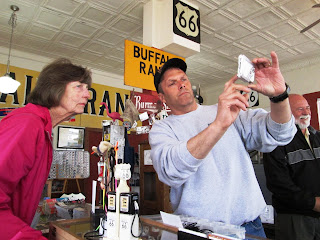 And here's the photo he showed  me -- taken on the day that he turned his truck over on the side of the road.  Yikes! 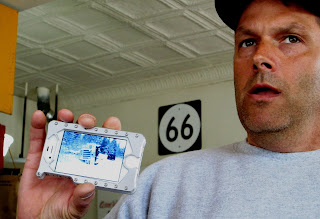 And what did I learn from Betty?  That I  have very nice friends, something I actually already knew.

When I first moved to the Metro Detroit area, the huge, banked oval was still in place. There used to be a car show there, and part of the "prize" for class winners was that that they got to make a lap on that oval. Must have been quite a thrill!

I'm pleased at what has been saved, but so disappointed about the loss of the bulk of the facility. I used to commute to/from work past there every day. It was sad watching Pulte raze the track to make way for a huge sub of tan, 2 story homes.

While the pavement for the track was being plowed up, and deposited in huge piles on the back of the property, I stopped and checked with the developer, and acquired a small (approx. 1' x 2') chunk of the old cement. To anyone else, it's a chunk of busted up old concrete. To me, it's my little piece of local history.

The first shows the facility today, with modern subdivision in the background. The second photo is an aerial view of the massive oval, and on the right side, center, you can see those same buildings and water tower, which provides some perspective.