The Aroma of Bacon

I really should have been a country girl.  I've always known it, at least ever since David and I had a small farm in the '70s, three of the happiest years of my life.  Now, at this phase of my existence, I have country "moments".  Today, driving to Afton pre-dawn, rolling through the countryside on Route 66, seeing nothing but outlines of fields and fences and an occasional white farmhouse standing out in the darkness, I suddenly smelled bacon.  Frying bacon, emanating apparently from that farmhouse I'd just passed, set back in a pasture on the left side of the road, the only one nearby.  Bacon!  Immediately, my farm girl instincts kicked in, and all I wanted to do was to be in that little house dining on bacon, a couple of eggs, and perhaps a biscuit with some freshly churned butter and recently made blackberry jam -- my reward for getting up on this cold morning and getting the cows milked before the sun came up.

And then, just like that, the bacon aroma was left behind and I was back in the Subaru, headed for a little old car museum in a little old Oklahoma town.  Real life had taken over once again. . . 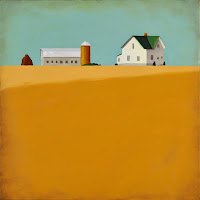 Robin closed Afton Station early yesterday because the power went out and it became intolerably cold. Yes, we're having another cold snap, with 30-degree temps yesterday and today.  So, Robin went home to her wood fired stove, and I don't blame her a bit!  If you stopped by yesterday, I do apologize.

Betty came to spend most of the day with me and she brought me a yummy sausage roll, which was almost as good as that farm breakfast I'd been daydreaming about. A nice family from Madison, South Dakota dropped in and enjoyed the cars.  The husband has a collection himself, including a '59 Edsel, a '57 Chevy, and a pickup from the '50s.

I had a long and fascinating chat with this gentleman from Elberfield, Indiana who has been on the road on his motorcycle for almost a month.  He's retired, and is enjoying the freedom of the road.  Before hopping on Route 66, he'd been to Daytona, FL for bike week and a number of other spots, and is in no hurry to head for home.  I really enjoyed exchanging stories with him. 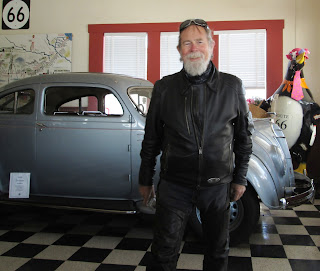 Toward the end of the day, two gentleman made a quick stop at the Station.  They were from Council Bluffs, Iowa and Grove, Oklahoma.  It turned out to be a day sparsely dotted with visitors, but a very nice one nonetheless.  There will be a big warmup now, they say, so I feel sure the number of visitors to Afton Station will increase as the degrees rise.
Posted by Laurel at 5:34 PM