It was a very slow start to my first day back to "full timing" it at Afton Station.  From now on, I'll be there on Tuesday, Thursday, Saturday, and Sunday and Robin will take over on Wednesday and Friday.  That leaves Monday our only closed day.   In other words.... SPRING HOURS HAVE BEGUN!

Today, however, it was apparently too cold to bring many people out on the road.  Although lots of friends stopped in, there were only three new visitors the whole day.   Crazy Legs Walker dropped in on his way home from a quick draw competition, Michael Scruggs came to discuss an upcoming showing of his photos at Afton Station, Betty dropped in, and Tattoo Man and Roz stopped in.   Tat and Roz were heading for the place where they have ordered a new trike, and Ron had to be fitted for a helmet since he has a larger-than-ordinary head.  Roz, on the other hand, fit nicely into a standard helmet, and here she is!  Their trike is scheduled to be delivered in about 2 weeks. 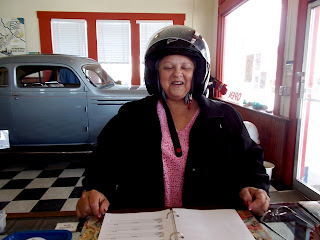 Ron M. was with me today, as usual, and after all the friends had left, we finally received the travelers.  A couple from Okmulgee came to visit.   I had every intention of taking their photo, but we had such an interesting conversation that I completely forgot.  She was from Germany, he an American, and both seemed delighted to be out on the road.   Our final visitor was a truck driver from Southern Illinois who has passed by on many previous trips, but finally had time to stop today.  He's a collector of automobilia.

That's it for today.  There's a car club coming tomorrow morning, so there may be more excitement to report then.
Posted by Laurel at 5:22 PM

You're back! Can spring be far behind?