Reflections, and then some 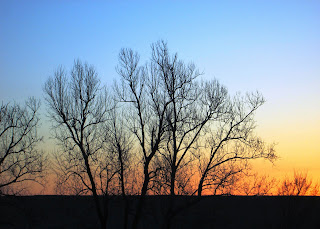 This is the first time I've been alone at the Station this season without much hope of seeing lots of visitors.  I could consider that this is going to be a boring day, or I could deem it a beautiful opportunity to do some writing and reflecting.   So, I've decided to reflect.  Someone may eventually show up to relieve my boredom, but until such time I hope you'll indulge my random thoughts.

I've had a charmed life, no doubt better than I deserve.  I wonder if most people feel that way about themselves, and I hope they do.  I had fabulous parents -- a crazy mother who made my life fun and a down-to-earth dad whose work ethic and extreme intelligence pulled him up from very little to great heights.  Both were loving and caring to their only child, and I won't argue that I wasn't a little bit spoiled.

School was good.  I was never bullied and I wasn't one myself.  I slid through on my enjoyment of learning.  I married the day after college graduation to wonderful David, a marriage that lasted for 32 happy years and produced Sarah, our beautiful daughter who inherited her dad's horse sense and my joy of life.   When my marriage finally ran its course, I moved to Oklahoma, a place I've come to love dearly.  There have been bumps in the road -- a couple of life-threatening illnesses and the divorce itself -- but I've come through those a wiser, happier person.

Route 66 has had a great deal to do with this story. Even though it has been in my life since early trips with my parents, it entered again with a vengeance when David and I bought Afton Station and I became the primary custodian of the dream.  On days like this, when others might go bonkers with ennui, I consider it a golden opportunity to think about the past, present, and future.  At age 67, I know I had better think fast about the future, but by no means do I dread it.  As I gaze around at all the great "stuff" that makes up my Route 66 life and then think about all the dear friends I've made who share my Mother Road obsession, I can't help but think that my future will be just fine!
______________________
I'm alone no longer.  Four groups of visitors have come to call and the day turned out to be anything but boring.  There was this young family, with cute baby Taylor, from Midwest City, OK.  He's a Purple Heart veteran and both are big time Route 66 fans who have visited most of the iconic spots on the Road. 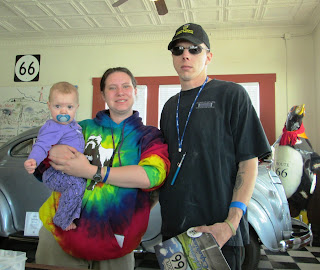 Two guys from Rogers, Arkansas drove over just to see the car collection. Shortly thereafter, three more guys came to see the cars.  When they left, they were going off to check out the 9-foot highway.  A grandma and grandpa from  Haskell, OK came in with their grandson.   Although the boy is young, his granddad has already given him a 1941 Ford, and he knows how to drive it!

My final visitors were two men from Lowell, Massachusetts who are taking a photo tour of Route 66.  They both have incredible photographic equipment, and although they say they're just amateurs, the website belonging to one of them, Rich Perry, reveals quite the expert hand in the craft. www.richperryphotography.com 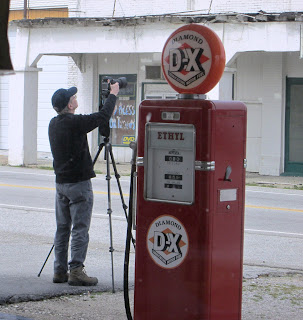 By now you know that I had a fine day.  It began with the pretty sunrise (above) observed on my way to Afton.   Even the minor roadblock (below) wasn't a problem, since almost no one travels Route 66 at that hour of the morning. 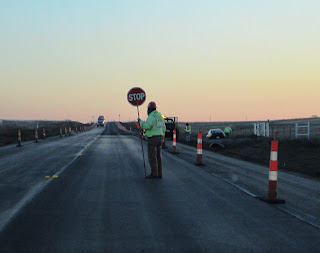 God has Blessed you, Laurel.

A little late on my response to this post, Laurel, as I just got back in town last night.

You see your life as charmed and those who know you appreciate the fact that you pass that joyful point of view along to all of us.