. . .  that there isn't much to say about today.   Ron M. and I had another day nearly devoid of visitors to Afton Station.  I'm sure the absence of travelers was weather related (ugly again!), although Robin did greet eight visitors yesterday, which isn't bad.  Today, the grand total was two, the extraordinarily pleasant people pictured below.   They're from Big Cabin, OK which is about 25 miles from Afton.  They were just killing some time on a day which wasn't good for much of anything, and I was pleased that they decided to spend their time with us, since they had been here once before and enjoyed it.   She was reluctant to have her picture taken, and I can't imagine why.  She looks fine to me! 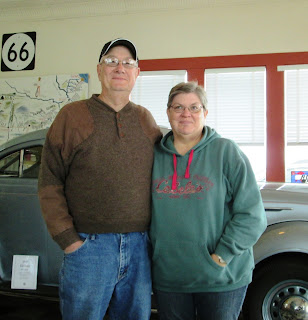 That's all that  happened at the Station today, but I did take a couple of "bonus" photos in Tulsa this morning before picking up Ron M.  Here's the Tulsa Monument Co., on Route 66 (11th St.), built in 1936 in a style that, although not strictly Art Deco by definition, is close enough to be considered so in this town of many, many art deco masterpieces.   This was strictly a drive-by photo, so I'll try to capture a better one at another time. 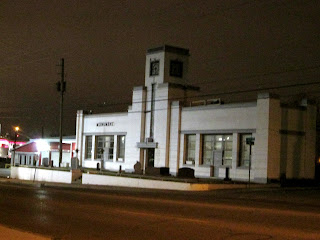 The drizzle on the windshield of my car made the street lights look like giant sparklers this morning!  I love it!   Unfortunately, the drizzle continued for the entire day.   We've just about made up for the drought conditions of the past  year, so now how about if we get a couple of dry days.  That won't be tomorrow, however.  They just announced that more rain (and possibly a flake or two of snow) will be the order of the day tomorrow.  Ugh! 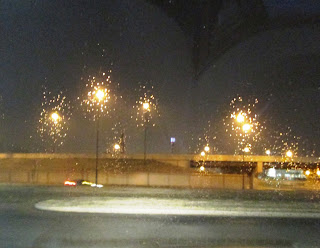