Thoughts of Spring, but When?

Ron M. and I intrepidly plowed through the snow this morning. . .  and by snow, I mean about twenty -- that's twenty flakes, not twenty inches.  For a much-warned-about-by-meteorologists event, it was a total dud.  However, I did get to snap the first ever photo of Afton Station with a little snow on the roof. 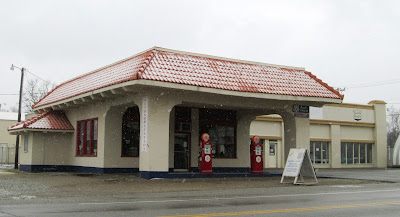 The meager precipitation soon tapered off, and in fact we drove home in mostly sunshine.  Lets hope that's the beginning and end of winter weather in Oklahoma this year.

At the Station, we had 5 visitors today.   There was a couple from Pawnee, OK and a man from Afton, as well as this lovely and spirited mother and daughter from Waukegan, WI who are spending the daughter's spring break by driving Route 66.  Rocky (the mother) and her husband live on a farm, where among other livestock, they have a small herd of buffalo!  Hallye, the daughter, is a student at Northwestern University in Chicago.  I loved the interaction between these two because it reminded me of my relationship with my own daughter.  Hallye even lives in the same town as my daughter, Sarah.  How 'bout that!  This duo had a car full of guidebooks and they're trying to see everything that time permits.  They enjoyed meeting Gary Turner yesterday!   I have no doubt that their Mother Road trip will be fun filled and successful. 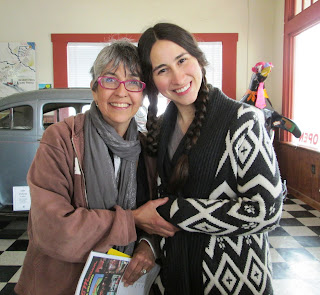 In our spare time (and again there was plenty of it) we took the winter mittens and scarf off of Tripper the Penguin and decked him out in his Easter finery.  I supplied a hat and Robin supplied some flowers.  You must understand that Tripper is a boy penguin, but he had no reluctance whatsoever to allow us to dress him this way.  We are wondering if he might carry an underlying tendency toward transvestitism.   :-) 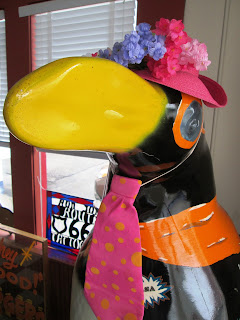 And while we were at it, Ron put rabbit ears on our do-rag model.   Yes, we're nuts, so get over it. 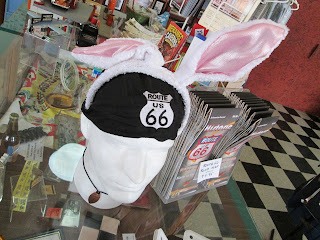 On a more serious note, our wonderful volunteer Ron Jones, the Route 66 Tattoo Man, is in the hospital.  He had emergency surgery on Friday night for a ruptured intestine as a result of diverticulitis which led to infection.  He'll be resting in the hospital for another half a week or so, but he's doing ok.  What a shame that this had to happen just after he took possession of his new "baby", the Stallion trike.   Hopefully, he'll be well in time to take advantage of the spring weather to come.

Best wishes to Ron for a speedy and full recovery. He certainly looked happy and raring to go in your photo of him on his beautiful red trike.

Tripper looks cute as can be and ready for spring and Easter. You know, I think it's kind of wrong for those who choose these outfits and put them on him to then question how gender appropriate they are. What can a poor immobile penguin do?!

Welcome home from NYC! I look forward to hearing all about it.

I'll convey your good wishes to Ron Jones when I talk to him.

Tripper, I'll admit, had no choice in the matter of being dressed in Easter finery. However, Ron M. and I both agreed that a small smile appeared on his face (read "beak") when the hat was placed on his head, and that was the clue. :-)