Just like old times... a good number of visitors, including a car club.  And an appointment for another, even larger car club for next Sunday.   Things are rolling right along.

The Valley Antique Auto Club of Russellville, Arkansas has visited a couple of times before.  Today it was a smaller group of 10 who drove over to Afton from Miami, where they spent the night last night after attending a showing of a  silent movie at the historic Coleman Theater.  Every now and then the Coleman shows an old silent film and accompanies it with their giant Wurlitzer theater organ, one of the few left in this country.  The folks who came to Afton today all said it was a great evening.

Anyway, there were ten people in five cars.  I didn't go outside to look at them but  Ron M. took  photos of two of the cars.  I love the striping on the turquoise one, but I don't know the make of the car. 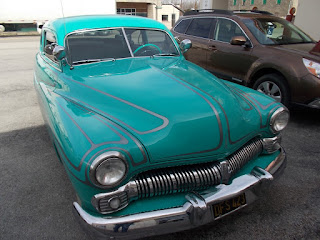 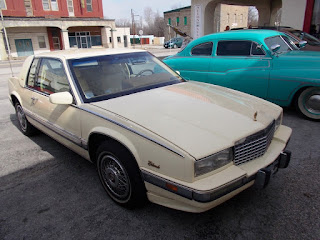 Here's the group, and (oh dear!) I must have moved the camera again, so the members can only be seen in their blurred best.  Sorry, folks! 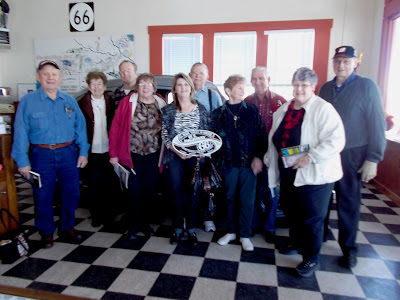 There were also visits from three folks from Joplin, MO who enjoy Route 66 and are excited that our International Route 66 Festival will be held in their town in August.  We'll see them again next Sunday when they bring a large group from their club, the Southwest Missouri 'Stang Gang.   (Yes, they're Mustang enthusiasts).  They've been to Afton Station before and always make us a stop on their cruises.   Also, three young people from Afton came in to video our museum.   They assured us that we'll be famous as soon as they edit the piece (recorded on an iPhone, I might add) and put it on YouTube.  That should be fun to see.

It was a good day at the Station.  Remember we're now open every day of the week except Monday. So please take a drive down beautiful old Route 66 and come see us!   We'll pop some popcorn for 'ya!