Happy Easter!  Memories of childhood -- mom, grandma, and me in our Easter bonnets, white gloves, and the gardenia corsages that dad bought us every year.  Big leg-of-lamb dinner at Aunt Alice and Uncle Durrell's penthouse apartment, Easter eggs hidden and found, big basket of chocolate and jellybeans, and a drive through the countryide around northern Ohio until sundown.

Oh, how different my Easters are now, and yet for the most part almost as satisfying.  I am very much at peace with my Easter Sundays at Afton Station, especially one like this, which yielded a full 19 visitors!

I was alone today, which made it a little difficult to deal with people when they showed up  in multiples, but I managed to reacclimate myself to bigger crowds fairly quickly after a winter of ones and twos.  I am, emphatically, NOT complaining!

My first guests were a couple from Omaha, Nebraska who were planning to drive Route 66 in Oklahoma on  this trip and were particularly interested in visiting Picher, the abandoned, polluted town I've talked about so often here on the blog.  I told them they won't be able to not be moved by the sight of the remains of this sad little town. 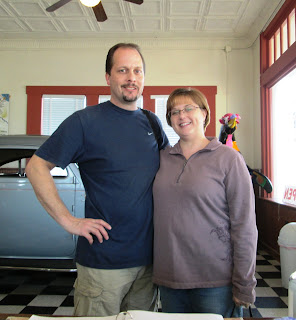 Next, a group of three men on motorcycles arrived.   They're from K & N Motorcycles in Tulsa and they've visited Afton Station before.  Last year they visited prior to setting up the Passport Tour, for which we were a stopping spot.  It was such a great way to get new visitors to Route 66 and the Station that I was thrilled to find out that they have planned to have us be a passport stop again in 2014 when the tour will be entirely on Oklahoma Route 66. 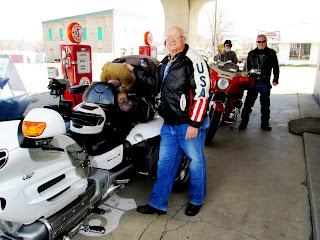 These two attractive young women from a suburb of Tokyo, Japan are brave enough to explore all of Route 66 from Chicago to L.A. with very little English but a lot of spunk and enthusiasm.  They were so excited about the pressed penny machine that they never stopped giggling as they used it.  It's just fun to see younger people, especially from the far reaches of the world, who clearly are appreciative of our beloved Road! 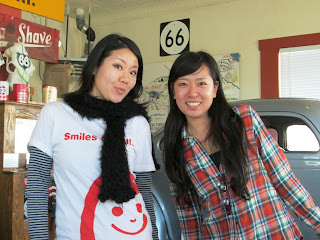 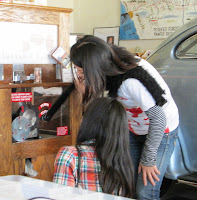 Here are Butch Barnes and his sister (oh dear, I can't remember her name!) who were very special guests because they grew up in Afton!  I wish I'd had more time to hear some of Butch's stories of the old days, but there were quite a few people coming in so it became prohibitive.  The one story he did tell me was so interesting!   When he was a boy, each year a few days before Christmas the town threw live turkeys from the top of a 3-story building and whoever caught the birds got to keep them, kill them, and make holiday dinners from them.  When Butch was 15, as he was diving for the turkey an older and much larger man shoved him so hard that he went through a ground-floor window and cut his neck so badly that he ended up in the hospital with 98 stitches!   From that year on, there were no more turkey throws!   Instead, there was a drawing each year for frozen turkeys from Bassett's Grocery! 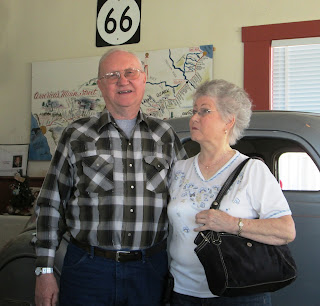 The rest of the visitors came from Fredonia WI, Dallas TX, Anna TX, and Tulsa, Vinita, and Grove, OK.  It was indeed a very Happy Easter at Afton Station!

Footnotes:   I came within about a foot of hitting a deer on my way to Afton.  He ran out in front of my car in the dusk of morning, but it was his timing and not mine that spared him

The two ladies visiting from Dallas stayed at the Desert Hills Motel on Route 66 in Tulsa last night.  They gave it a very favorable report, which isn't usually the case.  They stayed in one of the rooms near the office, which we've heard are the ones which have been most recently revamped, and they saw no evidence of the "shady characters" that others have reported on the premises.  So, just sayin'. . .
Posted by Laurel at 5:41 PM