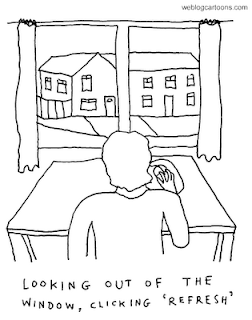 This is what I wrote yesterday.  Upon reading it again, I really can't figure out why anyone would be particularly interested in it, but since I went to the effort to write down my thoughts, I  might as well publish them here.

I hesitate to call what I do at Afton Station a "job", but for lack of a better word, that's the one you get.  In my mind, a "job" is where one goes to work and gets "paid".  Neither of those words apply here.  I don't feel like Afton Station is work, and I certainly don't get paid.  And yet, this is the best situation I've ever been in, and I wouldn't change it for anything.  Where else would I so readily lose a fistful of money every day and smile about it?  Where else would a fly swatter be a constant companion and a very good day depends on that day's kill count?  Where else would I stew in the summer and freeze in the winter and not complain (too much)?

The thing is this:  I needed a life change -- and I got it in spades.  My Connecticut life was almost too perfect. Enjoying being an empty-nester.  Living in a house that could have been on a magazine cover.  Doing my volunteer work at the historical society or the school or at the non-profit crafts store.  Having magnificent friends who all enjoyed plenty of partying, fine dining, or just hanging out together on a regular basis.  Having all the time in the world to manage my postcard collection and reaping the social benefits of David's car collecting hobby.  It was all pretty nice -- until it began to crumble. Afton Station came into my life at just the right moment, although so oddly timed that it defies explanation, so I won't.  Suffice to say that I landed here in Oklahoma without a husband and with only a couple of local friends.  And Afton Station was my savior.

Twelve years later I'm still here, and I'm still reveling in the culture shock of my life.  Talk about broadening my previously sheltered life!  Prior to Afton Station, I'd never gotten to know a long haul trucker.  I'd never made friends with a felon or ex-con.  I'd never met what seems to be half the population of far-off Australia (and loved every one of them!).  I'd never loaned money to a steady parade of mentally disturbed people.  I'd  never met honeymooners from South Africa. I'd never watched historic buildings crumble and fall before my eyes.  I'd never had a guy show up at my door on stilts and never bat an eye. I'd never met anyone running across America, much less dozens of them.  I'd never have started photographing sunrises or carefully watching the growth of corn, soybeans, and sorghum.  I'd never have met the little band of fabulous people who are fellow Route 66 fanatics, and whom I think of as a family. I'd never have become a blogger and learned the joys of pouring out my inner thoughts to so many people at once. Or maybe TOO many thoughts.  I'd better stop now, but not until I make sure that those of you who read this know that you are part of the joy of my new life at  Afton Station, and I appreciate every one of you.
Posted by Laurel at 2:45 PM

I agree with Becky. I feel blessed to have met you. I am doubly blessed to read your blog posts. Thank-you is a small word, but I do mean it.

Thank you so much, Miss Dazey! You are a pleasure to know.

Thanks so much, Becky for recommending we call into Afton to meet Laurel. We had a great chinwag, took some cool photos and walked off a bit of that fab dinner we ate at the Big Texan a few nights before. Take care, Sean & Nicky.

Nicely said, Laurel, and an excellent reminder that the only thing we have to do to change is . . . well . . . change! I admire your bravery and applaud your perseverance.

I'm sure it was a shock to move from politically liberal Connecticut to politically conservative Oklahoma. But, at least you're open to making friends with different people discussing other points of view in a respectful manner.

I'd like to visit CN sometime to visit all of the historical sites, because that part of the country is where American history began.

You're right, Trevor. The first house we lived in in CT was built in 1705. When I moved here to OK and bought a 1915 house, people worried that it was too "old"! Ha ha! History is everywhere in Connecticut.

I love it, Laurel. It states your feelings perfectly, and I am so proud and happy to call you Friend. :)

This brought me to tears. I'm sure there are so many like you who live and work on 66 with similar experiences, but you really brought it to life. Thank you for all that you do...you are an inspiration!!!