Although the centerpiece of this Saturday at Afton Station was a visit from a group of Harley riders, we had an equal number of truly interesting visitors not on bikes today.   The day was just perfect for a ride on a motorcycle, but it was also great for drivers of cars, walkers, runners, or lazy folks like me who just sat behind the desk and greeted some of the above.   Ron M. came with me again today, and Betty was there for a while, too.

The Harley group was from Route 66 Harley-Davidson in  Tulsa, out for a day in the country.  Here's the whole group. . . 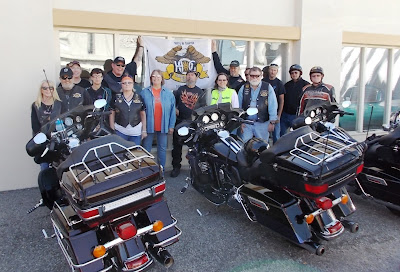 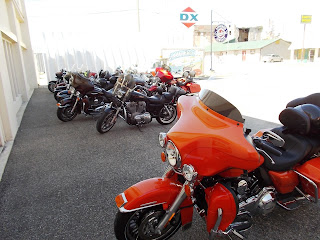 . . . and here's Tom (signing the guest book), their fearless leader who had the good sense to bring the group to Afton Station!  Thanks, Tom.  We liked your posse and hope you'll return soon. 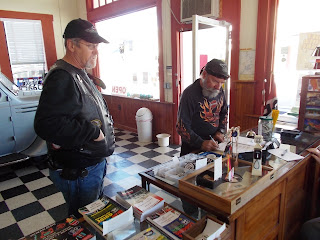 Earlier in the morning we had six interesting folks all arrive at just about the same time, and what ensued was a lot of chatter among them and exchange of experiences on Route 66.   One unique couple was from Springdale, Arkansas -- she an impressive sculptor and painter and he a magnificent woodworker.  How do I know this?  Because they brought with them three folders of photos of their work.  Great stuff!

The next couple was from Prescott, Arizona and are doing a Route 66 trip which happened to be one of many trips over the years which the husband has carefully catalogued in several amazingly well-organized scrapbooks -- photos interspersed with old postcards of tons of places along the route.  I sat with him and looked at every single photo with great interest.

The third couple came from Munich, Germany -- a young and eager twosome.  They got a lot of tips on traveling Route 66 from the others.  They also taught me that there's a word for "tourist trap" in Germany -- touristenfalle! As I've said before, I love when strangers become friends during visits to Afton Station, and this morning was such an occasion.   Here are all of them.  On the outside are the two young Germans, the guy in the cowboy hat and the lady in red are the artists, and the lady in green and the man seated next to me showing me his scrapbook are the Arizonans. 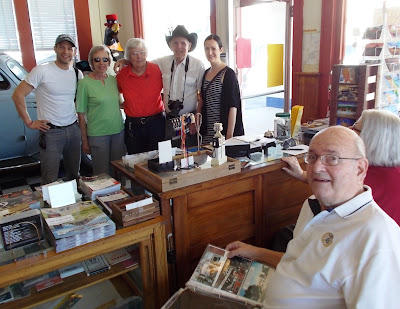 The Springdale couple fell in love with the DeSoto and needed a portrait of themselves with it.  I love this photo! 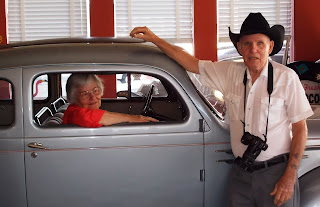 Our Route 66 friend Brenda St. Clair from Akron, Ohio has been touring California and Carsland at Disneyland with Lynn "Lulu" Bagdon and Dean "Crazy Legs" Walker, and she stopped in today to tell us all about the trip.  I was correct a few weeks ago when I predicted that Disneyland would never be the same after their visit.   Brenda said it was amazing, and the greatest part of the trip was that they were treated like royalty there because of Dean's connection to the movie.  (He was the inspiration for the 'Mater character.)  As a result of this, they were taken to the front of every line and got the top spot at the evening light show in Radiator Springs.  Brenda had dozens of funny stories about the trip.

Afternoon visitors came from Wiltshire England, Claremore OK, Tulsa OK, and Paris France, as well as a guy who wouldn't say where he came from, but had a very nice dog named Spot.  And it will all begin again tomorrow morning at my little touristenfalle in Afton, Oklahoma.
Posted by Laurel at 5:55 PM

I definitely wouldn't categorize Afton Station as a touristenfalle. We did encounter one or two of those along the way, though!

I love to refer to my place as a tourist trap! I even have it on the sign in front, and it brings in lots of people. Of course, we don't trap anyone, but it's a kind of nostalgic idea for lots of my older visitors. :-)