September continues to start off with a bang.   There were 40 visitors to Afton Station today, and that's not even counting the tour group that was supposed to come but didn't.  Actually, I left at 3:30 but Phil was going to stay for another hour in case they showed up, and I hope they did.   The biker group is led by Friend-of-Route 66 Ken "Landrunner" Turmel, and it wouldn't be like  him to blow off the entire stop, so I'm assuming that some difficulty befell the group that resulted in them getting behind.

This Australian fellow is traveling solo across the U.S.A., and his enormous undertaking will take him to all 50 states.  He has already visited the lower 48 and when he completes Route 66 he will fly to Alaska for a few days then fly to Hawaii on his way back to Australia, thus completing the full 50!  The whole trip will have taken 4 1/2 months by the time he's done.  His wife was with him for most of the trip, but had to fly back early, leaving him to complete the feat alone. 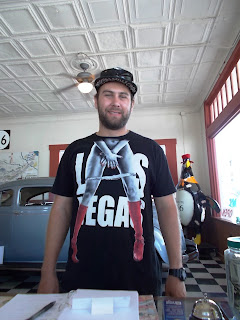 And while we 're talking bucket lists, this young chap from Japan (accompanied by his "chase car" driver), is bicycling across Route 66.  He carried with him a piece of paper on which he listed the rest of the feats he plans to complete before being satisfied.  He's already biked the Gobi Desert in Mongolia, and when the Route 66 bike trip is over his next achievement will be to climb the highest mountain in Antarctica.  And  yet, with all of these lofty goals, he seemed to be incredibly impressed by Tattoo Man's tattoos.  He and his friend were virtually howling with appreciation as Tattoo bared his skin to them. 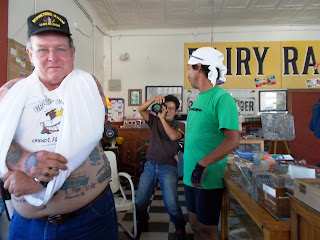 These two friends from New Zealand added a nice touch of good humor to the day.  They're heading west and I have no doubt that they're having a rollicking good time.  They, too, got to view Tattoo's bare skin, which seems to have been a general theme for the day.  It's nice to have Tattoo back after his absence during his father's illness and passing. 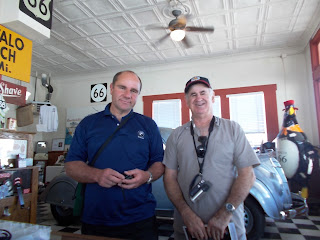 This young couple from Bratslavia, Slovenia took lots of photos and admired the cars very much while I admired them.... lovely people! 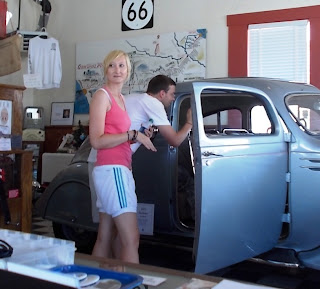 Yesterday, Tattoo Man attended a tattoo convention in Tulsa and. . . surprise, surprise. .  . got himself yet another piece of body art.  This time, it's on his right hand and pays tribute to his retired status.  He isn't stopping there, however.  He told me of plans for two more designs in the near future. 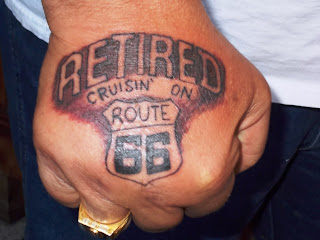 We were told by two local Afton folks that shortly after Phil and I left yesterday, a large group of Mazda Miatas arrived at the Station.  Well, fooey!  We hate to miss groups, but it surely would be helpful if they scheduled in advance.  And even if it's a last minute cruise, it would ensure our hospitality if they could just call the same day and we'd do everything in our power to stay open for them.  In this case, we hear that they were taking lots of photos through the windows, but I'm still disappointed because I love to meet all the travelers in person!
Posted by Laurel at 5:38 PM