Today was cool, in more ways than one.  First, when I got in the car this morning the temperature was 60!   Sixty!  It's been months since I walked out the door and didn't immediately feel wilted.  Refreshing!  Second, I survived my first day alone at Afton Station since way back in June, and that was cool.  I had to remind myself that I used to spend every day alone at the Station, before my dear volunteer team started to spoil me by their constant presence.   The 18 visitors today got just me alone... and of course a couple of showrooms full of gorgeous cars, a neat old building, and lots of interesting souvenirs and books.

Yesterday, some extremely strong winds hit Oklahoma in the late afternoon, killing 4 people and downing trees and knocking out power.   The center of it all was very close to Afton.   In fact, several semi trucks on the interstate at Afton were overturned and one driver was killed.   I texted with Marly, who lives at the very center of the mayhem, and he said it had been very scary.  That's saying a lot coming from Marly, who isn't really afraid of much.  Afton Station had no damage, just some debris which collected on our property.

The front side of our doors are completely full of autographs now, and the backs of them are quickly filling up, too.   These aren't great pictures, but if you click to enlarge them, you might see some of the signings close up. 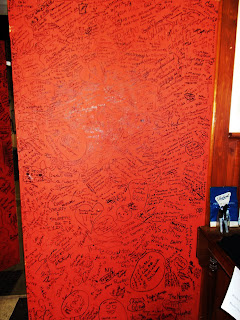 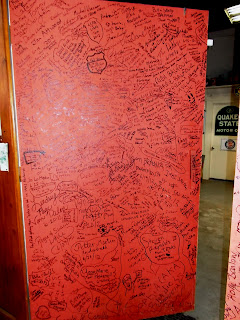 Dan from Sand Springs, OK and Rick, a trucker from Princeton, IL struck up a long conversation about cars, trucking, and life in general. 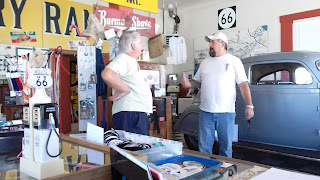 And here's Dan (from the above photo) with his wife and friend.  He's visited several times before, but this time he brought the two ladies to show them what he enjoys so much about the Station. 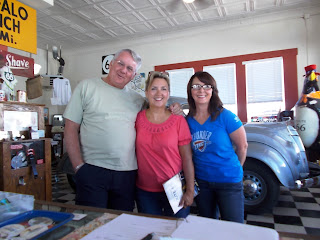 These two folks from Como, Italy were my first visitors of the day.  I didn't see a single moment when they weren't smiling.  Apparently, they are ecstatic about their trip despite being in the midst of the big storm yesterday.  They were optimism personified.   I'm sure some of their happiness came from having spent four hours with Gary Turner at his wonderful Paris Springs, MO station yesterday. Nobody leaves there without a smile. 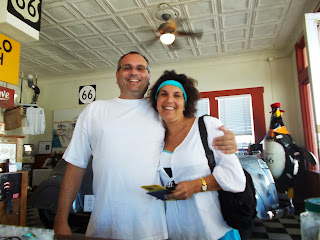 I went through some old records (I keep great records!) and found that we have been open every single day since April 2nd!   That's because of the hard work of my volunteers who wouldn't think of letting the Station be closed just because I can't be there.  I'm sure we can keep this up until November or December, so come on down any day of the week, 9:30 to 3 p.m.

What an all around lovely report. Maybe cooler mornings will become a usual thing as we get closer to the beginning of fall. You do have a remarkably loyal support team. Congratulations to you and all of them for keeping the Station open every day this season.

Dear Laurel, we had such a pleasure to meet you and to see all your wonderful old cars. Great that you bring life and happiness every day for the Route 66 travellers. A few hours after visiting you we met Ron and his beautiful car & tatoos. What a lovely day. See you and take care of you. Joelle & Stefano

Thank you so much, Joelle and Stefano. It was a pleasure to meet you, too. I do hope you have a wonderful experience on Route 66!