Meet Bella, Betty's brand new baby Corgi.  What a cutie!  She was given to Betty as a surprise early birthday gift from her kids.   She's such a sweet dog.  I've fallen in love with corgis ever since last month when our friends who came from Salt Lake City to help while Ron M. was in the hospital brought their adorable and well-behaved corgi named Whipper.  Bella is very much a puppy with lots of puppy behavior traits, but she was a perfect little lady during her first visit to Afton Station. 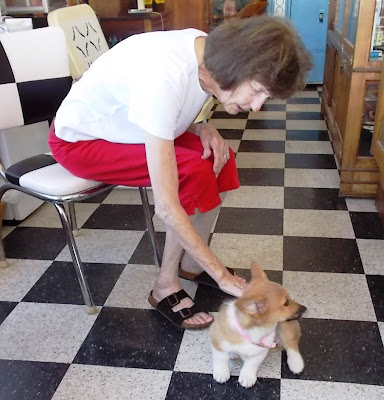 Corgis originated in Wales, so it was a perfect day for her to make her Afton Station debut, since a majority of our guests today were her fellow Europeans.   They came from Lyon France, Hamburg Germany, Eersel Netherlands, and Yorkshire England.   Of course, a number of our 21 guests were also domestic, arriving from Elizabethtown TN, Lexington MI,  Derby KS, Tyler TX, and Bartlesville OK.  Unlike yesterday, when Marly had a frustratingly slow day (only 4 visitors!), today was lively, made so by a good number of happy travelers.  All of the European folks were doing all or most of Route 66, as were several of the U.S. folks

Here's the Perrin family from France --  (l to r) daughter, mom, dad, son -- who are touring Route 66.  The daughter has spent some time in the U.S. learning English, so she was the translator for the family. 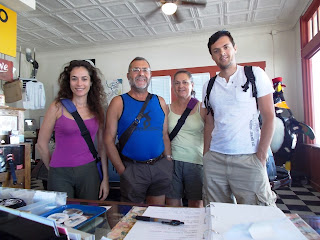 This couple, the Schenkes, hail from Hambourg, Germany. . . 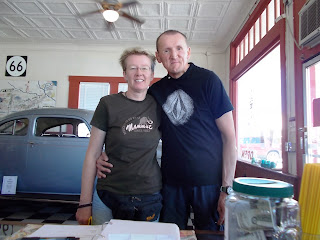 . . . and these four fellow travelers are from Eersel, the Netherlands.  Each couple bought a copy of Images, David Wickline's amazing pictorial history of Route 66. 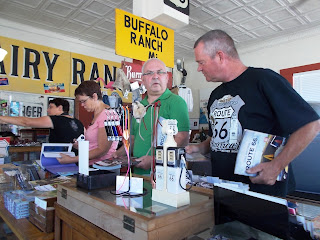 I never get past September 11th without being mindful of the tragedy of 2001 and how close to home it came to my family and me.  It still breaks my heart.  Today, as I drove home from Afton on Route 66, I saw a huge puffs of "smoke" coming from just over the horizon as I was driving across the plains.  In my mind's eye I once again saw those two majestic towers fully engulfed in smoke and fire.  As I came over the slight rise, I realized that it wasn't smoke after all, but instead a farmer plowing under some crops that had once attempted to grow in our very drought-stricken earth, kicking up huge billows of dust -- so much like the Dust Bowl, another tragedy that once befell our country, a totally different kind of tragedy.  So much sadness all around.   About both, we must never forget.
Posted by Laurel at 5:29 PM