Not much of a title, is it? Well, it's a reflection of my day at Afton Station. What can I say? I had exactly ONE visitor up until 1:30 p.m., quite a departure from the 56 visitors I had a mere two days ago. Sometimes I just don't understand. Betty stopped by in the afternoon, and then three more people wandered in -- two from Wichita, KS and one from Bartlesville, OK.

The morning visitor was a photographer from Timpson, TX who has taken some very nice photos of old, rusty gas pumps and cars in Texas, and now is turning to Route 66 for more interesting images. The couple from Wichita, KS is doing Route 66 in segments, and they're on their Tulsa-to-Kansas segment. The fellow from Bartlesville has been past Afton Station many times but never was able to stop in until today.
David and Marly were supposed to erect the huge D-X sign today, but dangerously heavy winds prevented it, so they did some much needed cleanup of the back rooms and the work room. Marly is almost finished dusting and cleaning the cars in the showroom. I used my free time cleaning the bathroom, Windexing, and getting things ready for the crowd of motorcyclers due here early Saturday morning on a Poker Run being held by the Vintage Iron Museum as a fund-raiser for the Red Cross. We're to be the first stop on the run.
On the way home, the wind continually tried to blow me off the road, but I hung in there and arrived home with sore knuckles from grasping the steering wheel. I was able to stop and snap this picture of "my" field, although I don't think there's been much growth since last week. We could use some rain. 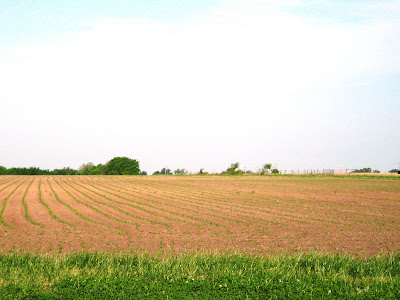