Today was a bit famine-ish, particularly after a week of feasting on great visitor numbers and my (perhaps premature) comments about how the tourist season has begun. Today we had a mere four visitors. Once again however, quality topped quantity, as we had some great guests.

A couple from Escondido, CA, traveling from Chicago to Oklahoma City on the first of a two-part Route 66 trip, were somewhat at odds over how much time to spend stopping at various sites vs just driving and looking at Route 66 from the car. Although the husband was a bit reluctant to stop at Afton Station, after he'd looked at the car museum and perused the Route 66 memorabilia he became an instant fan and agreed with his wife that there were indeed stops worth making along the way. Score! They were taking their Mother Road tour in two parts because they were quoted a $1000 extra drop-off charge if they didn't return their rental car to the same place they got it. This seems so wrong!

A gentleman from Cleora, OK stopped in, and we were fascinated by his vehicle, a Subaru Mini-Truck. Although I'd never seen one before, he told us that they're fairly common. In our area, about 70 are imported from Japan each year. It gets 50 mpg, but it isn't street-legal on interstates. The steering and gear shift are on the right. It goes about 60 mph full out. Cute little thing. Subaru Japanese Mini Trucks - Mini Subaru Trucks, Japanese Compact Trucks & Vehicles 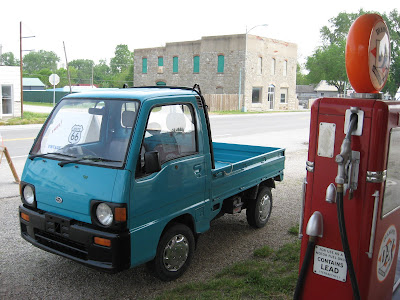 A woman who grew up in the Afton area came in, originally to sell web advertising, but she stayed a while as we exchanged stories of old Afton. I always quiz Afton natives about the history of the town, and it turns out that she is trying to compile a history, too. I hope to see her again and do a little more picking of her brain.

Ron M. was with me today (thanks, Ron, for cleaning my car interior!), Betty W. dropped by, and a surprise guest was Tattoo Man, freshly out of the hospital! He was looking good and seems to be ready to get back to normal life.
Posted by Laurel at 5:37 PM

What kind of vehicle is that?

Kyle, It's a Subaru mini truck.