The Easter Parade at Afton Station was a parade of visitors. Although it's a very non-traditional way to celebrate the holiday, I thoroughly enjoyed visits from new friends (and an old friend) today. Ron M. was with me, and the weather was perfect for sitting outside, except that every time we tried to do it we'd get more visitors and need to go back inside. That's fine, too.

We had 14 visitors today, and they came from Coldwater MI, Huntington Beach CA, Greenville WI, and Tulsa, Broken Arrow, Prior and Grove OK.
An interesting visitor was Paul Both, who ran into the Afton Station (literally!) on the 84th day of his run across America from Huntington Beach, CA to New York City, on behalf of Run for Liberty run for liberty as he travels across the country, in his words, "talking about liberty, less government, free markets, sound money, running, and of course, CRAFT BEER!" That's quite an array of causes, but apparently he feels strongly about each, because he's accomplishing quite a feat. He has a "sag wagon" traveling with him, but they went on ahead while he visited with us. 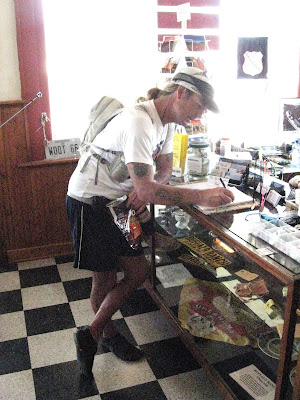 This couple from Coldwater, MI was stalled on their Route 66 trip while getting repairs made on their Newell Coach motor home at the factory in Miami. 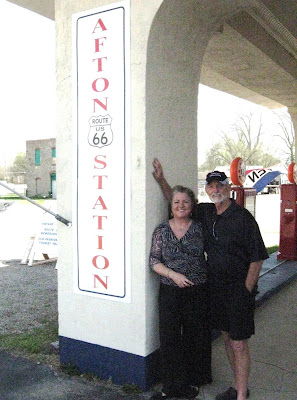 We had a visit from a Civil Engineer from an engineering company that was doing some surveying outside the Station. When I see that happening, I get a nervous feeling in my stomach. This very nice fellow came in, however, and assured us that the surveying is for an upcoming project to bypass the Horse Creek Bridge. The bridge is crumbling badly, he said, but ODOT knows its historic value, thus plans to build another bridge next to it and preserve the old concrete one. Ahhhhh. (That was a sigh of relief). He assured us that ODOT understands the need to spare the historic structures in Afton. Now, let's see if that's really true. Right now, I'm optimistic.

Toward the end of the day, my friend Julie Miner from Tulsa stopped in. They're building a lake house in Bernice, which is very close to Afton. It was great to see her and catch up on a few months of news.
Big day. Tired. Bye for now.
Posted by Laurel at 5:29 PM