Are Ghosts Messin' With My Travelers??

In the same week, two people (independent of one other) showed me photos they'd taken of the Palmer Hotel across the street from Afton Station. Both people commented that they were the only "bad" pictures in hundreds and thousands they'd taken on their Route 66 trips.

This one, by photographer Gordo, appears to be woefully overexposed. . . or something??? Believe me, I've seen thousands of Gordo's images, and none have exposure problems except this one and another similar one taken at the same time. 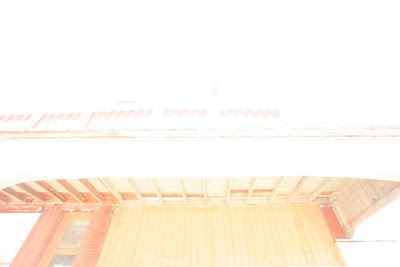 Dan Rice showed me this one when we visited over lunch a few weeks ago during his pass through Tulsa on his Route 66 travels. He was astounded by it, since he said the light didn't look anything like this on the evening they drove through Afton and snapped the picture. 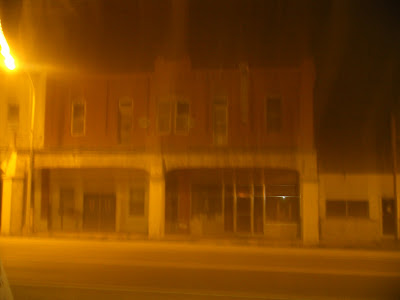 He then showed me this picture, taken in front of Afton Station at the same time. He was most interested in the blue spots, which he called "ghostly orbs" that appeared on the photo when there were no blue lights anywhere around, nor were there spots on his lens. 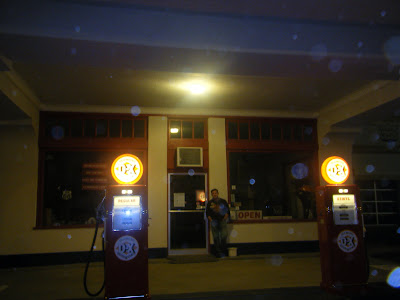 I have to admit that I do believe in ghostly goings-on, after having lived in a house built in 1825 in which multiple unexplained phenomena occurred. I'm willing to go along with the ghost theory for Afton, since I can't think of a better town to host spirits from another dimension.

If you click on the pic and enlarge it you can see the orbs even clearer.....dee dee dee dee.....

Would I be a terrible spoilsport if I explained the technical reasons behind the three shots you posted?

Oh, it's much more fun this way!

Yes, please do explain.....The exposure info on the exif data embedded into the images was correct.

If this helps in your explanation RFH, the exposure info for the image shown was this.....

Oh, if anyone wants a more detailed explanation, it can be found at:

In most instances, 1/30 second + ISO 400 + Oklahoma daylight = massive overexposure. Your settings sound about right for an interior shot at Afton Station, but WAY too generous with the light on an exterior shot. I'm guessing you were having so much fun with Laurel that you forgot to slow down your ISO and speed up your shutter when you stepped outside to shoot the Palmer. :)

You said it best yourself...In most instances....but not all. And if you reread, I had posted it was in open shade.....NOT FULL DAYLIGHT!!

You are assumptions are filled with inaccuracies and are quite humorous. You say my settings sounded about right for an interior shot?? That statement is wrong in so many ways, and I'm not going to waste my time explaining. You have no idea what the light was at the time I took the picture, yet you are trying to explain to me what I did wrong?

Assuming the settings were wrong, since Oklahoma is known for brighter light than anywhere else, (doesn't it say that on some license plates??? OKLAHOMA-"We have the brightest light"), you are still missing the point of the original posts....How did my setting change? I did not set them. Out of over 6000 images I did on my trip, these were the only ones that were really overexposed..(must be that extra strong light again).......

BTW Em, I hadn't done interior shots. So, sorry to discredit your thought process. Perhaps there are some spooky forces taking place. Aren't Hippies supposed to be open minded?? Lighten up dude!!

Having never operated a camera successfully in my life, and being known up and down the length of Route 66 for my lack of talent or intelligence, I must humbly apologize for suggesting that pointing a camera at the sky and leaving the shutter open for 1/30th of a second might yield a dramatically overexposed image. One should never attribute to photographer error anything that could be explained by supernatural intervention.

I accept your apology. It's nice to find someone who can realize a mistake was made and own up to it. FYI, the camera wasn't pointed "up at the sky"; it was under the roof of the porch, in open shade. Plus some cameras have spot meters in them, which will measure a 3% area of the image.