I'm enjoying a fairly restful morning here at Afton Station. It's a perfect weather day, the door is wide open with no need for the a/c. I am being serenaded by the sound of power tools as Marly works in the back of the Station. I've had three visitors so far this morning, a couple from Hattiesburg, MS heading fora photographers' convention in Kansas and a local man who collects and restores old cars of his own. There have also been a number of "stop and shoot" folks, people who take pictures of the exterior but don't stop in for a visit.

Gordo is due here soon on his way home after 3 weeks of shooting photos on Route 66. He stayed at my house last night. Well, sort of. After we partook of some exceptional tequila liquer -- straight up -- he decided he'd sleep on his air mattress under the stars in my back yard. Mind you, in my back yard "sleeping under the stars" is more like sleeping under the glow of the McDonald's which is just over my back fence. Since the all-night drive-thru was a few yards from his head, I suspect he woke up asking himself if he wanted fries with that. 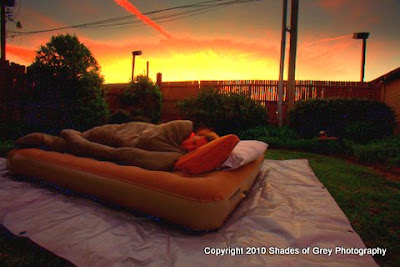 I had already left for Afton when he took this picture of himself. Looks like he got to see a gorgeous sunrise!
___________
The afternoon brought several more visitors, including a family of four from Durant, OK, a local Afton man, a couple from Fowlerville, MI returning from a trip to Arizona, and a trucker from Minneapolis, MN. The clouds are gathering, so I suspect there'll be rain tomorrow.
___________
Our dear friend and volunteer Tattoo Man is in the hospital for a while while receiving intravenous antibiotics for a serious infection. Get well soon, Tattoo!
Posted by Laurel at 5:24 PM