Sorry to start out this way, but during breakfast this morning I caught this smidgen of conversation by two waitresses talking about a third waitress: "She can outburp the bread man!" Such an accomplishment! I've been laughing about it all day!

Meanwhile, back at Afton Station. . . It was a very quiet day today. Thank goodness Marly was there because I had someone to talk to during the lulls. Marly was trying to work in the back, but I made sure he took long talking breaks. :-)
Marly was there for a while yesterday too, and he had 5 visitors, from Coloma MI, W. Fargo ND, and Winchester, CA. Today I only had four visitors, from Webb City MO, Vinita OK, and DePeue, WI. The gentleman from Webb City was representing the Ozark Trails Studebaker Club, and he came to ask if we would be the final destination of their cruise on May 8. Of course, I said! Mike Pendleton also dropped in, as well as two men from the electric company to discuss a light in our back yard.
On the way to Afton this morning, I finally was able to stop in the middle of the road to take a picture of the remains of the Country Courts Motel. It's a difficult place to take a picture, but I was uninterrupted this time long enough to snap this one. Poor old Country Courts... not long for this world, I think. 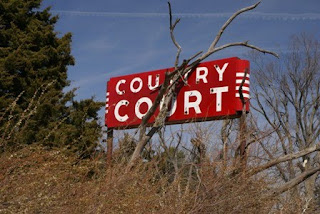 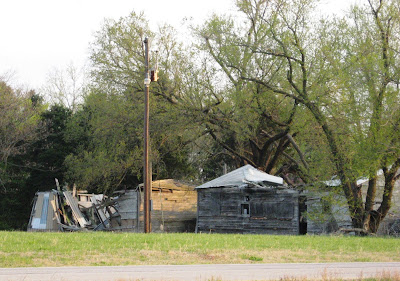 Finally, today's sunrise behind the water tower in Claremore. 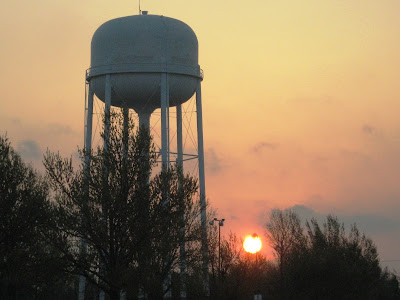 Such a shame to see old icons in such disarray :o(

Nice shot of the big ball of fire!!

Shane was on the train to Chicago last Sunday and the woman sitting across from him talked on the cell phone constantly. At one point, she made a call and said, "Happy Easter, bitch!" That cracked me up.

Thanks for the Country Courts pictures. Yeah, it's not looking good for them. :(

The Country Court is starting to look a lot like John's Modern Cabins.

I love reading you blog! I cant remeber how I stumbled across it but im here to stay! It so sad to see places like the Country Court abandon and run down. Be sure to come vist over at "Everyone Goes to Mick's"!